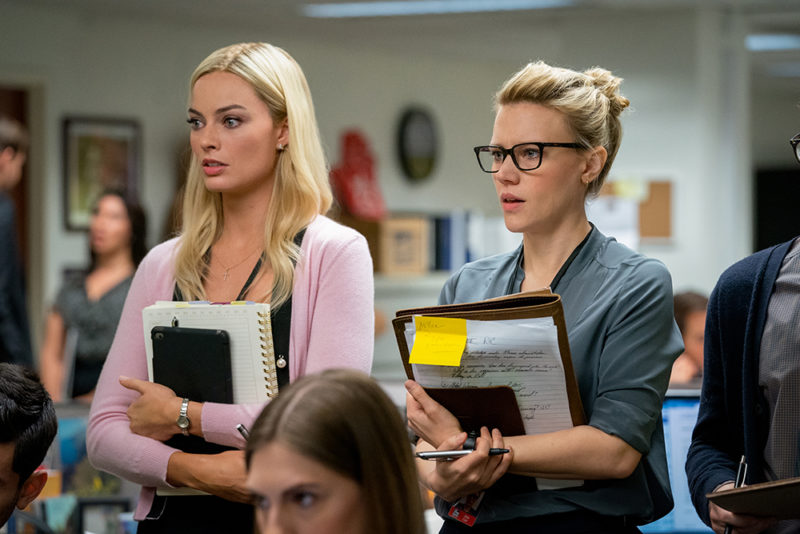 Bombshell essentially takes all the news stories about Ailes’ takedown and mashes them into a dramatic retelling that shines a light on the women of Fox News — women I count as faux feminists whose words and actions are in support of a political party and that is racist, classist, and dangerous — but nonetheless, women who banded together to take down a despicable and evil man.

The film centers on former Fox News anchors Megyn Kelly (Charlize Theron in facial prosthetics so convincing she looks like a carbon copy of Kelly, but your brain still knows it’s Theron, so you just feel like something is very, very wrong when you’re looking at her), and Gretchen Carlson (Nicole Kidman, who looked like … Nicole Kidman in makeup that made her look older than usual and a bad wig). And also adds production intern Kayla Pospisil into the mix (Margot Robie, who looked just like her usual, gorgeous self), a fictional amalgamation of several employees who came forward to report harassment by Ailes.

At the same time Kelly’s questions to Donald Trump at the first televised debate of the 2016 presidential race start a very public war between her and the presidential candidate (BARF BARF BARF BARF), Carlson is getting yelled at by Ailes for her “no-makeup” on camera stunt, which sets her up to be fired. Shortly after — as planned — Gretchen sues Ailes for sexual harassment claming that because she didn’t play along, she first got bumped down to a lower rated show and then was fired.

Kelly takes notice of Gretchen’s suit — and also notices pretty young Kayla entering Ailes’ private elevator, which makes her wonder if the sexual harassment she herself suffered when she came to Fox is still going on. OH I DON’T KNOW MEGYN, YOU THINK?!?! The whole thing comes to a head when Kelly also comes forward, spurring over 20 other women to come forward; a division in the newsroom in which half the female employees wear “Team Roger” tees; and ultimately, the Murdochs swooping in to boot Ailes out.

My friend and coworker who saw the film with me pointed out that the it sure goes out of its way to show you that Fox News isn’t necessarily a bad place. Making Kayla a young, more “open-minded: republican than you’re expecting because she sleeps with another woman (Jess Carr/Kate McKinnon, who is the most glaring example of it, “Look! This woman who works at Fox voted for Hilary and is gay! She’s just STUCK at a job she doesn’t like!) and pokes fun at some of the networks’ right wing politics.

Ultimately the powerhouse performances in this film were the only things I enjoyed. John Lithgow as Roger Ailes, while not buried in as much makeup as Theron, does a killer job inhabiting his sense of power and manipulation. There’s an important moment with Kayla in his office where he’s asking her to show off her legs that made me feel like puking; partly of course because Robie can say 1,000 things with just her eyes, and partly because Lithgow made the scene feel wayyyyyy too real.

And while not on screen very much, the Murdochs were the only part that I would brand as “fun” — and that’s only because I’ve been devouring Succession on HBO so I was making comparisons between the actors here and there. There’s nothing fun, in real life, about them trying to appear heroic by firing Ailes, especially when they ended up giving him more money to get out than they gave to all the women who reported and sued him, combined.

As much as I want to support all women’s voices, I say skip this and read the NY Mag piece by Gabriel Sherman + enter a rabbit hole of video footage on YouTube that shows things happening on air instead. Like this montage of Carlson being harassed on air by her co-hosts (recreated in the movie), or the time Roger demanded a camera follow Megyn’s legs as she walked down the hallway to the Decision Making room.

I guess that is one piece of info I got from this movie I didn’t have before (because I don’t watch Fox News) – those glass desks? Put in place by Ailes on purpose so the female anchors’ legs were visible at all times.