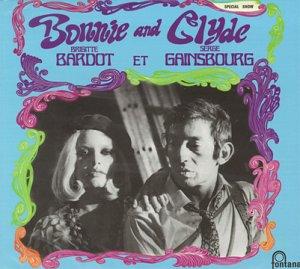 "Bonnie and Clyde" by Serge Gainsbourg and Brigitte Bardot

Maybe it's just that I'm a sucker for anything sung in French, but this has to be in my top ten songs of all time. "Bonnie and Clyde," a duet between dirty old Frenchman Serge Gainsbourg and the lovely Brigitte Bardot, tells the adventurous tale of famed outlaws Clyde Barrow and Bonnie Parker, and it does so entirely en Francais. Now, I took French in high school but I can't begin to understand the song word for word; what's fun for me is the little bits that I do understand, like:

Ok, it may be the most basic French, but I know what he just said! It's little snippets like this that I can sing along to that make me go gaga for this song. But it's also the way it sounds — the pulsing rhythm, the strange vocal cackling at the end of each measure, the low, sultry voices of the singers romanticizing the story of the outlaws…  It all folds up nicely into a track that I could listen to over and over.

I first heard Serge Gainsbourg when I was about 13. An older friend who'd done a semester abroad in France let me borrow a Gainsbourg CD and it was like nothing I'd heard before. I recall it was some compilation of his work, featuring songs sung in both French and English (he recorded in both languages) and including several reggae-influenced tracks. I listened to it on repeat for months, and I never gave it back.

Some of you may recognize "Bonnie and Clyde" from Luna's cover of it, off Penthouse. Dean Wareham & co. did a fine job with the song; their version doesn't stray much from the original, so if you're down with Luna, find yourself the Gainsbourg/Bardot original, or simply watch below.