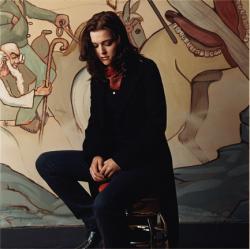 Brandi Carlile at The Paramount

I’ve yet to attend a disappointing Brandi Carlile show — an impressive statement about an artist I’ve seen at least a half-dozen times. Each time I wonder if she’ll somehow falter or not give a full-hearted performance, but it’s never so. For the first few songs of Friday night’s show at The Paramount, I wondered if I were witnessing that moment. Brandi and her band didn’t see inspired; instead they seemed more rote and subdued on stage. They’d been on the road for several months, and I wondered if this last US stop before embarking on a newly announced Australia/South America/Europe tour could’ve felt like just one more night to get through before packing and heading out again.

But a couple songs in, Brandi addressed the crowd, acknowledging how bloody nervous she was to be back home and playing a sold out show at the esteemed Paramount. The crowd’s reaction — a throng of cheers and hoots — must’ve felt like a giant, comforting hug, because from that point on, Carlile let her guard down and rocked the hell out of the show.

Carlile — accompanied by the “Twindigo Girls” as she lovingly referred to twin brothers Tim and Phil Hanseroth on guitar and bass, respectively, and a drummer and cellist — put on a magnificent performance showcasing her soulful, bluesy material.

At most great concerts, there are one or two moments of pure arm-hair-raising glory: those decisive moments where you think, “Yes, this is going to be a fantastic show.” On this night, those moments kept on coming. There was the great rendition of “The Scarlet Tide” (from the film “Cold Mountain”) with Brandi’s younger sister, Tiffany. There was the debut of Carlile’s recently penned “classic country and western song,” which she says she wrote while on tour as an attempt to amass all the clichés of those traditional tears-in-beers song into one. (And while Carlile assures us this song was a joke and it did incite some laughter, the song was still brilliant.) There was a fantastic display of crowd-interaction as Brandi and the Hanseroth twins led the entire crowd in a sing-along: each coached the crowd on their side of the stage to learn and sing their vocal harmony on “Turpentine,” and for the remaining minutes of the song, it was one giant choir, swelling the harmony to fill the entire ballroom. And there Brandi’s triumphant closer of “Hallelujah,” which honestly gets more beautiful and more spiritual every time I hear it.

The most special moment, though, was completely unexpected and surprising. For a few songs, Carlile and band had sung acoustically atop stepstools, noting how they’d been wanting to bring this element to their live show for a while and would finally realize that goal in Seattle. But when they stepped away from the stools and up to the front of the stage, literally turning off the feed into the mics and attempting a “truly unplugged” song, I gasped. Sans any amplification, Brandi hollered out to the top rafters of the theatre’s third deck to make sure they could hear her, and then launched into song. Never before have I seen this, though I’ve always questioned the “unplugged” moniker because it never truly is. It was shocking how well we could hear the band — the Paramount’s acoustics clearly shone during this song, as did the immeasurable talent of these five. And the crowd was pristinely quiet, keenly listening to each note. But when the performance concluded, the cheers — in comparison with the muted beauty of the song — were deafening. Priceless beauty.