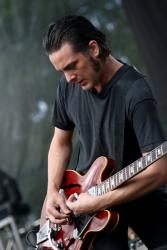 Bumbershoot 2007: I saw Black Rebel Motorcycle Club Twice! (* but they were fully clothed)

The choice to book Black Rebel Motorcycle Club to play Bumbershoot this year was inspired, putting them on the main stage, even better. Putting the rockingest main stage band on at the most un-rock and roll time of 1:15 pm: a little curious to say the least.

Memorial Stadium can swallow lesser bands alive. If you’re used to playing two thousand person capacity clubs, it can be pretty damn intimidating playing a football arena that can hold 60,000, especially if it’s only a quarter full at best. BRMC seemed out of place in the afternoon heat with each of the three band members dressed completely in black. The strobe lights on the stage were barely visible and seemed odd in the sunshine (but would have added to the experience after dark), yet that doesn’t mean they were not up to the challenge.

Playing for around an hour, the band played songs from each of its four albums (B.R.M.C.; Take Them On, On Your Own, Howl, and this year’s Baby 81). A few songs were acoustic but for the most part the set was made up of the catchy, loud rock drowning in distortion. The rock songs were a better fit for the venue they were playing in and hearing them played live was still quite memorable. Highlights included “Berlin,” “Weapon of Choice,” and my favorite BRMC song, “Whatever Happened to my Rock and Roll? (Punk Song)”.

The main stage afternoon set was pretty damn good, all things considered (and they still sounded better live than they do canned through the headphones on my iPod) but a second set of the afternoon, at KEXP’s Music Lounge, was nothing short of spectacular. BRMC played a six-song, stripped down acoustic set to a crowd of somewhere around 100 very lucky people. Four of those songs came from the band’s third, and mostly acoustic, record Howl (“Fault Line,” “Shuffle Your Feet,” “Love Burns” and “Ain’t No Easy Way” – and a fifth song, “Mercy” was recorded at the same time but appeared on an EP released around the same time). The final song was “Weapon of Choice” (from Baby 81), which was a rock song played acoustically.

With all of the reverb stripped away, the guitars unplugged and the drums and bass removed, you could (finally) hear just how amazing the voices of Peter Hayes and Robert Levon Been truly are. Their vocals were strong and clear but also revealed a vulnerability that doesn’t always come through on record.

This was a rare and phenomenal show – it was even pointed out that it was the first show where drummer Nick Jago played guitar. It was easily the best one I saw this weekend – and, after attending 9 of the past 11 Bumbershoots, I think I can say it is my favorite memory of the festival yet.