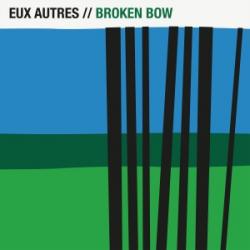 Eux Autres has been releasing records since their first seven inch came out in 2003, and you can hear a band that grew up on 90s indie mod-pop, but they sound as fresh now as if they had just put things together in the garage for the first time earlier this year.

Broken Bow is only their third full-length though, which might explain why Eux Autres hasn’t exhausted themselves through the ’00s. The new full-length may not snap with the production buzz that debut Hell Is Eux Autres (first issued in 2004) had from Janet Weiss and Jeff Stuart Saltzman (Sleater-Kinney/Quasi), but it has a timeless, rough and tumble pure pop feel that perfectly matches its sometimes joyful, sometimes troubled, always kind of complicated lyrics.

The band is still Heather and Nicholas Larimer (sister and brother, both on vocals and the latter on guitar), with the 2008 addition of drummer Yoshi Nakamoto (The Aislers Set, Still Flyin’), and the eleven song cycle begins with the French hymnal-set to grinding punk guitar “Jamais,” a haunting sing-a-long that sounds like it could be a flexi-disc with Shindig! magazine. “Queen Turner” is the shiniest anthem of the album, coming up as the second track, with powerful strums and a winding vocal melody which brings you back to its narrative of “seasonal changes and scattered beggars.”

“Wind Me Up” reminds one of how the band was compared to Built To Spill in the early days, with its percussive guitar fuzz and punchy rhythms about how “needles and pins wait to wind me up again,” collapsing into a hand clap chorus. “A Band Undone” has Nicholas sounding somehow both cocktail lounge and like Mac in Superchunk, with keyboard twinkles and that same tasty, mournful Southern vocal flow.

“You’re Alight” is really the album highlight for me though, with its Cure-like drive and images of “stacking stones with our enemies,” railing icily against nostalgia while warmly delivering a “flash of the fire-light.” Midway through Broken Bow, the embers burn on this song the brightest, but that’s just a reason to pull the blanket around yourself and a friend tighter to get warmer in the night. Anthems like the tough “Rosehill” and “My Love Will Not Let You Down” will then see you through till the dawn.

This is pretty straight-forward indie pop, very little frills and recorded simply, but the stories and seemingly effortless vocal talents of Heather and Nicholas should bring you back to Broken Bow again and again.