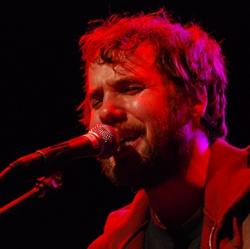 “Broken Social Scene Presents”? Sketchy if anything, right? It turns out this moniker will be the format by which various members of the former super group will be releasing their albums — with Brendan Canning’s solo debut slated for 2008.

Bottom line is, after so many years of establishing the name Broken Social Scene, why give it up? Sure the band broke up awhile ago, but I see the “Broken Social Scene Presents” title as an extension, the afterlife of Broken Social Scene, if you will. The new lineup consists largely of the same members as the former Canadian super group anyhow. I see no problem with the reincarnation.

The night started out with me trotting up to Will Call in the frigid cold to claim my photo pass, and catching a glimpse of a tall and dusty haired man, clad in a matching green sweater and shoes. He looked strikingly familiar. My persistence in ogling him was not swayed even when Mr. Kevin Drew himself walked right in front of me, having talked to a gaggle of girl fans. “I think I know who he is, but could it really be?!” I thought to myself. It was Chris Walla of Death Cab fame, and I, Chona Kasinger, stood behind him in line at Will Call! Petrified in super fandom, I introspectively questioned myself as he walked away. I wasn’t convinced that it was Walla I actually stood behind until I saw with my very own two eyes Mr. Walla, along with Mr. Ben Gibbard, walk on stage during the finale of Broken Social Scene’s set.

New Buffalo, the brainchild of Sally Seltmann and Australia’s response to Regina Spektor (minus the edgy spunk) was as perfect an opener as could have been. Seltmann puzzled over quizzical and flowing piano arpeggios, complementing her sweet-as-imported-nutella voice. Seattle sat in silent awe through the duration of her 30 minute set.

Then the young audience rushed up to the stage’s front as the lovely, predominantly Canadian feet of Kevin Drew and friends graced the Moore’s 100 year old stage. Proceeding several moments of bizarre and absolutely enchanting banter on Kevin’s part, BSS led off into several tracks from Spirit If…, including the emotionally railing “TBTF” and conspicuously Nada Surf-sounding “Lucky Ones."

The onstage antics, from Brendan Canning’s epic kung-fu kicks to Kevin’s consumption of a tea/tequila beverage hybrid while offering various insights, proved the band charming, if anything else. Old favorites, such as the clap-clap inducing “Stars and Sons” (which gained established notoriety, along with a bulk of BSS songs on indie flick “Half Nelson”) and epiphany-inspiring “Superconnected,” no die-hard BSS fan left the Moore Friday night disappointed.

In an obvious rush to meet the night’s time constraint, Kevin rushed through the last couple songs and announced “Ok. Pretend we left! Now we’re back on stage! Encore! Everyone get up here! I want everyone to sing along to this last song!”, as a mish mash of people careened on stage… including friends, family, and half of a little Seattle band called Death Cab for Cutie to aid in a rendition of the debut release’s closing track, “It’s Going to be Really Hard When We Get to the End.”

Kevin was right — it was incredibly difficult for everyone to part the venue after the developed and refined perfection of Broken Social Scene’s live show, only bolstered by the guest appearances of local indie-rock heroes. Until next time, one can only hope a smaller venue (“I wish we could do a big group hug!” Kevin wistfully said, “Why aren’t we playing the Crocodile?”) and further appearances from American Analog Set and friends.