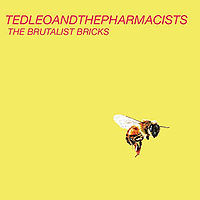 “If there’s one place where you’re scared, it’s a bunker.” So said urbanist, art critic, and political theorist Paul Virilio in an interview in a book of conversations called Crepuscular Dawn, before he and author Sylvere Lotringer described the architecture of the Brutalists, in which construction is associated with “pulling out the insides, the guts of a building.” So that it “makes a facade of the skeleton” of a structure. Sort of how our country has been pulled inside out from eight years in a bunker, the hope still sucked out of our lungs by the louts in power.

In a similarly Expressionist way, power pop prophet Ted Leo welcomes back his fans with “When the cafe doors exploded, I reacted to you,” the opening to “The Mighty Sparrow,” the splattering, rippling opening track on his return and Matador debut, The Brutalist Bricks.  “Then I saw you, the red, white, and blue.”

There has been some talk that The Brutalist Bunker is too torn open, falling down on itself to tear out of the gates; its chiming guitars and shouted wisdom probably the inevitable result of a man who had a very sick wife since his last record (2007’s Living Among The Living) and is exhaling as well as revealing exhaustion. So many Jam-and-Thin Lizzy inspired anthems, dub bass-pulling travelogues, anxious journaling about making it through the journey to the end of the night of the ’00s. As he sings in the third track here, “Ativan Eyes,” “The new millennium’s tough,” it was all begun a decade delineated by Leo’s leper-touching “The Tyranny Of Distance,” in which our individual time bunkers took away freedoms the way that elections then had somehow become a farce.

But while this has left Leo “so sick of cynics” and that he “wants someone to trust in,” I think people who attribute the overplus of urgency in The Brutalist Bricks to devastating emotional emergencies also put faith in concrete altars. Those landmarks are gone; the slate has been wiped clean by hierarchies falling apart. We have less of what he maybe never deserved in the first place, and forced to move, might find salvation. As long as we don’t look back or try to document the magical moment into eternity.

“Many are the beauties of the Fall,” Leo rhapsodizes in “Even Heroes Have To Die,” perhaps about the time of year when order darkly flutters apart, maybe about the journey that came after we lost our innocence. Those who gave up all faith in the Bush years are probably not unlike those who can’t feel the raw rush of near hardcore 2/4-driven “The Stick,” or can’t groove on the Eddie & the Hot Rods-like pub-punk of “Where Was My Brain?” If they’re not willing to pay attention to the more caustic confessions in Leo’s narrative, they’re also likely to miss out on the superplusgood mod-pop of “One Polaroid A Day” (one of my Top ten singles for the summer). With gut-punching lines “We’ve got to hang on while others document decay. But you want to control everything. You are your own worst enemy.”

Leo is talking about “the discipline to let things play,” something very hard to do the last decade. But now something we must do in order to survive. And as Chris Bailey of The Saints once sang, “In the struggle to survive some things must die.” And if his album after the dark years seems a little too everywhere at once, well, so does any kind of true redemption.