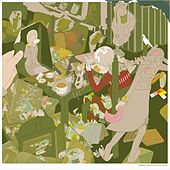 Buddy is an LA-based band founded in 2006 by lead singer, Buddy Humberston. Humberston is a tenor with a sweet side (but also a goofy side; one of his claims to fame is his cover of Kelis' "Milkshake"). Alterations and Repairs is a sugar coated bullet of a debut album. Each song has an undertow of ebbs and flows reminiscent of the indie scene but this album has more soul and heart than any LA band I have heard thus far.

My favorite has to be “11/22.” It's not the most upbeat song, more of the kind of track you mourn to. But it’s just so darn beautiful. The piano is rich; Buddy's voice is strained, quietly pleading:

We know things always happen/ for no reason at all/You say though/ before you go/I should probably be letting you go.

The album is chock full of songs that are open for interpretation and intensely fluid. It flows, waxes and wanes from upbeat guitar driven songs like “No Heart” to the opening song “Say a Lot”; the melody drifts along as a sort of musical river. Some would say that this connection makes all the tracks sound similar but they don’t and that’s mostly due to Humberston’s skill as a songwriter.

To be blunt, I love this album. It's near perfect, the kind of CD you want to give to friends with a post-it on it that just says "play me." There's definitely something about Buddy, making this first album Repairs and Alterations a rare gem, the kind of CD that every track warrants the hallowed ground of "repeat."