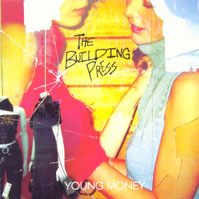 Math rock rules. Not only is it easily identifiable as a genre, but also its practitioners remain above criticism — anyone who doesn't like it can be dismissed as just not getting it. This of course is a copout on math rock's part, so I will do my best to overcome the inherent obstacle and judge it anyway.

I'm no dummy, so you can bet your sweet ass that I love Seattle's premiere math rockers, The Building Press. As much as they probably hate being categorized (thanks to the free-spirited musicians in them), their sophomore LP, "Young Money," is rigidly true to form (thanks to the structured mathematicians in them). It's obvious from the very first seconds of the album (a shouted, "You're like the punchline to a bad joke" punctuated brash syncopation) that enjoyment will be a challenge. Dissonance, incongruence, atonality: these are the perceptions that first spring to mind.

The music can at times be so frustrating that beyond not wanting to hear it, you shudder at the thought of the kind of repressed childhood trauma that would actually lead the musicians to create such atrocities. But then, just as you are about to wholly dismiss what can be nothing but a pretentious joke aimed directly at cultured consumers, the music suddenly, seamlessly falls into peaceful, resolute harmony. The remainder falls away and you are left with a perfectly balanced equation to which you can bob your head in time. And because the earlier parts of the song pummeled you so heavily, this bliss-ridden lull is so soothing as to sound, for the fleeting moment that it keeps you at peace, like the most perfectly composed opus in the history of composition.

The album's centerpiece, "If you think I can't get to you… you're wrong," closes with the line, "And we'll do it every day/Because we do it every day," a dose of irony that underscores the band's unconventional approach to music. They are most certainly not playing rock by the book, although they've obviously read it many times through.