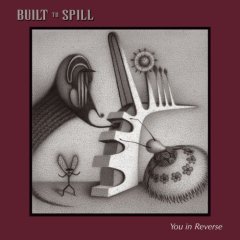 Right now, I am probably doing the most quintessentially Pacific Northwest thing I could possibly due in order to review the two new albums by Northwest stalwarts Built to Spill and Quasi: sitting uncomfortably in an overpacked coffee shop drinking an overpriced coffee-type drink. This does not happen where I am from (for those of you not keeping score, that would be Boston). Baristas are not chatty and friendly. Coffee does not come in 10 different flavors. Or at least it didn't in the "good old days." However, it does seem horribly appropriate to listen to these discs here.

The Pacific Northwest is spoiled in terms of music. I mean, think of all the bands you can boast? Not all parts of the country can do that. Quick, name three great rock bands from, let's say, Delaware! No? Iowa! You get the picture. So, with the release of the latest from Boise's Built to Spill (You In Reverse) and Olympia's Quasi (When the Going Gets Dark), you can revel in the knowledge that even though you don't have a Dunkin' Donuts to save your life, you do have a bevy of great bands up here.

Doug Martsch took about five years off from Built to Spill since their last album Ancient Melodies of the Future. That album was not as well-received as other Built to Spill, and Martsch seems to react to that. You in Reverse is a very loose album from Built to Spill, with less reliance on giant, elaborate, cross-hatched melodies. Instead, the band seems to let the songs arrive organically and take it from there without so much ornate production. Of course, Doug hits us hard from the beginning with "Goin' Against Your Mind," one of the most bombastic Built to Spill songs ever. The dueling guitar intro that seems to go forever (in a good way) and the driving drums lead into the most frantically paced song to come out of Martsch since "Joyride" and it is incredibly refreshing. The band thrashes about, has a little interlude where Martsch tells us When I was a kid I saw a light/floating high above the trees one night/thought it was an alien/turned out to be just God and finishes with reckless abandon.

The rest of the album doesn't have the same adrenaline rush of "Goin' Against Your Mind," but the looseness of the arrangement still make them seem refreshing and spontaneous. "Liar" has the lo-fi feel of something from Ultimate Alternative Wavers, but at the same time has the pop sensibility of tracks like "The Weather" from Ancient Melodies. The darker tone that was set on Perfect From Now On is revisited on "Saturday," but in the Readers' Digest condensed version, clocking in at a mere 2:24. Some forays into the blues-oriented rock of Martsch's solo disc, such as "Wherever You Go," harkens to Neil Young live, with clashing guitars and feedback. These songs are balanced by lighter numbers like "Conventional Wisdom" that has a Matthew Sweet-type power pop feel as the sunny guitar line dances through the song. Overall, the guitars seem much freer than in recent Built to Spill albums, and this is especially evident on "Mess with Time." It has an eerie Middle-Eastern melody to it, but the guitars drive along like a cobra writhing in a basket, moving hypnotically through the song. The album closes with "The Wait," the most produced song on the album, but it feels like an outro sort of track that rambles along like a long drive to someplace you haven't been in a long time: everything seems familiar but not entirely the same. You In Reverse taps into the the entire Built to Spill discography to create an album that would make diehard fans happy along with gathering more into Martsch's flock.

Quasi started off as one of those bands that you couldn't talk about without constantly reminding the reader that it's made up of a divorced couple (Sam Coomes and Janet Weiss), just like I just did right there. They've transcended that tidbit since their debut in the mid 1990's, but somehow you feel that they might have gotten lost along the way. 1998's Featuring Birds was filled with brilliant indie rock gems that had hooks, melodies, and great lyrics. Since then, Coomes has become more and more obsessed with making Quasi rougher around the edges — and with only moderate success.

When The Going Gets Dark is Quasi's third album on Touch & Go Records and their first since 2003's Hot Shit. This new album is slightly toned down from the blues-oriented rock of Hot Shit, but it still lacks the fine song craftsmanship that set their earlier albums apart. The opening song, "Alice the Goon" starts off with an atonal thunder of sound (a recurring theme on the disc) and slowly reverts to a more typical Quasi rock song, but is still nagged by a vagueness that doesn't seem to fully mesh with the song. "The Rhino" takes it one step further as Coomes' piano borders on feverish Ben Folds madness but never has any coherency or hooks to speak of. Maybe that's what seems so missing: the unstoppable hooks, both musically and lyrically, that set early Quasi apart from the crowd. Some songs work a little better with Coomes newfound love of grandiloquent sounds, such as "Peace & Love" that thunders along like a 500-lb gorilla with Coomes shouting "Peace and love/cut through steel" until his voice grows hoarse. "Poverty Sucks" works in a throwback fashion much like the Black Keys, with a blues-rock feel that is appropriate for the subject matter. However, whereas "Beyond the Sky" captures some of the carefully crafted majesty from Quasi's by-gone era, with Sam & Janet's vocals blending wistfully over the melody, most songs like "Merry X-Mas" or "Presto Change-O" just feel so dissonant that you can't really sink your musical teeth into them. At least the closing number, "Invisible Star" has the tender yet slightly bitter feeling that many of us long for from Sam and Janet. Come back Sam, we want you back!

These two albums showcase two bands heading in the same direction, but with highly different results. The spontaneity that both bands want to capture seems to work for Built to Spill but not for Quasi. Why is that? It's hard to tell, but could lie in the nature of the band. Built to Spill seems to favor these guitar-oriented wanderings, while Quasi always seemed to favor Sam's vocals and piano, which feel like they've been lost in recent times. In any case, both bands have become the old guard of the Pacific Northwest indie scene and just like the Space Needle, thousands of needless referendums, Ichiro and Bigfoot, things wouldn't seem right without them around.