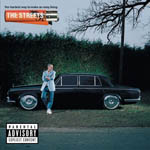 The Hardest Way to Make an Easy Living

Using the following, I'm going to show you
(A) Mike Skinner is still the oddest hip-hop star on the planet
(B) He's really quite enjoying his ultra-mega-fame and
(C) He's gone all krunky!

The Hardest Way to Make an Easy Living is good. Don't get that wrong. Quite a lot of it is real good. However, when you've set the bar with A Grand Don't Come for Free, sometimes people are disappointed that the new album doesn't, well, cause their brain to explode with joy. I'm not one of them, but Hardest Way is more uneven and less satisfying, but oi! it's still a sodding good spin.

Hardest Way can really be divided into two parts: the giant, club beats and the runts that seem to never make it. The giant, club beat songs typically take the runts out back and beat them severely with large steel pipes. It's this divide that makes this album so frustrating. Mike, you can make simply jaw-dropping music, so why do you taunt us with only half an album full? Is this the product of complacency now that you're fabulously wealthy, f^#&ing pop stars and generally having a good go of it? Are we asking too much from you, Mr. Skinner?

One thing that is evident right off the bat is that Mr. Skinner has been cross-pollinating with American hip-hop as much as he uses the British club beats pioneered by him and Dizzee Rascal. "Prangin' Out" has a very Dr. Dre feel, strangely reminiscent of "Forgot About Dre" from 2001. Skinner details the stress added from trying to promote a new disc, touring, promotions and all the rock and roll lifestyle. A sense of loss of control permeates the song, musically and lyrically to the point where Skinner states right now logic states I need to be not contemplating suicide/with rationale thought it would seem I need to be not doing the stuff that makes death like an easier option. It's remarkably heavy for a guy like Skinner. Luckily, Mike hasn't lost his sense of humor as "War of the Sexes" feels like a throwback to Original Pirate Material with a dancehall beat and playful banter on the proper way to seduce a woman: you're not playing hard to get/you're playing at not getting a hard-on yet. It is these "advice column" songs that Skinner really excels, especially when he lets his wit take over such as the ending line And remember not to get hammered either/cause people who get hammered don't get to nail!. The pinnacle of advice on Hardest Way, and probably the pinnacle of anything on the disc, is "Can't Con an Honest John". It is the most bombastic song that the Streets have even done. The song is driven by a thick, juicy keyboard line straight out of Ludacris or Timbaland and thunderous beats that are broken up by a sing-song type, almost nursery rhyme chorus. Skinner describes the most elaborate (and brilliant) that involves a dog, a bartender, your pal Farqua and some clever lies. It's songs like this that showcase the genius of the Streets – a slick combination of infectious production and quick lyrical content.

The title track to the album is the fun-loving partner to "Prangin' Out". Skinner tries to convince us that being a supermegaultrastar is not what its cut out to be. You know, all that money, women, etc. isn't really that much fun when you add the label, the promoters, the video directors, the touring and all. The whistled melody can't help but make you think of the Seven Dwarves and poor ol' Skinner marching off to the mines every day. If you're not convinced that life isn't that great as a star, Skinner brings it home on "When You Wasn't Famous". I mean, who hasn't complained that how the hell am I supposed to be out to do a line in front of complete strange when I know they all have cameraphones? I know this bothers me every day! The horrifically infectious Scottish highland flutes and marching beat to the song make it the early frontrunner for best song of the year even when you don't add in Skinner's loose and easy rapping. The album closes with "Fake Streets Hats" which is a great story of Mike getting really pissed off for all the wrong reasons while on tour over an weirdly eastern flute-loop that is combined with a dark, sinister sequencer line like Aphrodite.

And this is when I sigh and wish that he could keep it up for another five or six songs. There are a few songs that almost make it only to fail to truly deliver. "Two Nations" tries to explore that gap between American and British culture, accusing the U.S. of being too busy shooting each other, not doing the right drugs and not buying Streets albums. "Momento Mori" is cute sort of anarchist take at "seize the day", but the production feels dated compared to songs like "Can't Con an Honest John". The same can be said for "Hotel Expressionism", but not only does the production feel dated but Skinner's lyrics about rock star vandalism just feels forced and been-there/done-that. Songs like "All Goes Out the Window" and "Never Went to Church" seem to an attempt to recapture the "Dry Your Eyes" magic, but the just fall flat. It just shows the difficulty in creating a good, listenable hip-hop ballad.

The strongest point of The Hardest Way to Make is Easy Living is the obvious strides Mike has made in the musical production for the Streets. When he expands out of the British garage sound and brings in aspects of that krunky* sound that meshes well with Skinner's loose style of rapping, this is when the Streets begin to really capture the promise we know is all in there. Mike Skinner is such an oddity that he might be considered a genre unto himself – neither really hip-hop, electronic, britrock or anything, but great nevertheless. There is enough quality music in Hardest Way to still make me excited about it, but jeez, I wish that it could just keep itself on target that just bang wall to wall.

* N.B., I honestly love the fact that I can use the word "krunky" to describe anything. Who makes up words like this? And why can't I do it too? I think I will. The Streets are now officially "mumty". Their beats are mumty and that's why it's great.