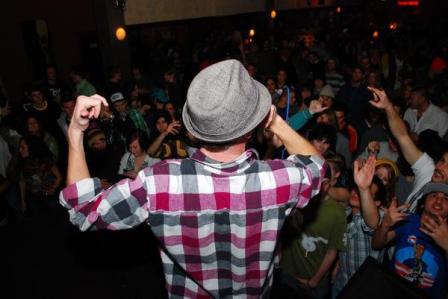 I’ve seen Macklemore perform exactly one time, and I loved it so much that I want to see him again and again. This Seattle (now living in Olympia) rapper is more than just a Hip Hop artist – in fact, his MySpace lists him as Hip Hop | Western Swing | 2-Step , which made me giggle quite a bit. He’s a political satirist, entertaining blogger, and pop culture junkie.

In addition to turning out some killer tunes, Macklemore has been known to don a stars and stripes hat, acid-washed jean jacket and mullet wig on stage to poke fun at stereotypical Americans (reminiscent of Trey Parker’s “America, Fuck Yeah” song in Team America: World Police). And honestly, that’s when I find him most entertaining.

And then take a listen to the stuff on his MySpace page – every single song is catchy, smart, and just awesome as hell. I’m highly recommending you check this show out!