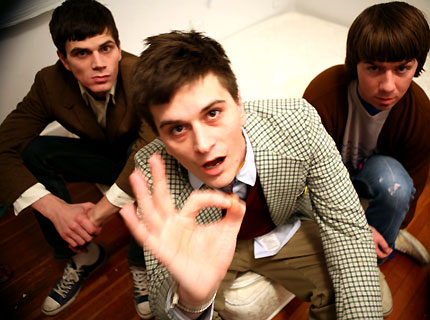 When I heard Wallpaper for the first time, I immediately thought of a cross between The Kinks and Weezer (at least Weezer before Rivers Cuomo’s likely lobotomy). The Auburn trio has a 1960s Brit rock sound with plenty of hooks while singing about minutiae like watching television. I was taken with their song “Pop Rocket” that sounds so simple: it’s just guitar, bass and drums; verse, chorus, verse – but that’s the point of pop music. It’s hooks claw into you right away and the next thing you know, their album, On the Chewing Gum Ground, is in heavy rotation in your head.

Wallpaper is two brothers, Derek and Spencer Kelley and their friend Steven Potter. They form a power trio (bass, guitar, drums) and each play each instrument and each sing. Yet, it sounds surprisingly cohesive. They were reportedly signed to K Records after impressing Calvin Johnson after while sharing a bill with him.

Here’s a video of Wallpaper playing “Pop Rocket” at the Comet:

Wallpaper plays in the EMP Sky Church at 6:15pm on Monday, September 7.