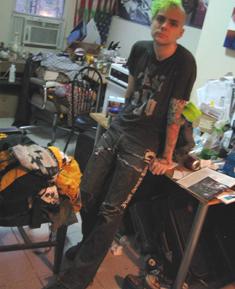 Artist and author Zak Smith has a fascinating story. To be as inarticulate as possible, his work looks like the band X sounds. His first book, Pictures of Girls featured brilliantly colored images of women in his life, and treated them with a certain detached, sexy reverence. With the critical and detail-oriented eye of a graphic novelist, he illustrated the entirety of Thomas Pynchons’s Gravity’s Rainbow with spectacular results. The work appears to have elements of Ralph Steadman’s quick line work and sinister feel, and is now permanantly housed at the Walker Museum in Minneapolis. Though most of his work is in paint and drawing, he is also a flesh artist. Smith also works under the name Zak Sabbath in the alternative porn industry. With his punk / D-I-Y aesthetic, there were most likely not many naughty pizza guys, cable guys, or plumbers involved in his films. It would appear as though he does the pornography for the art of it- the money he made from his first film, Barb Wire Kiss went entirely to the charity Food Not Bombs.