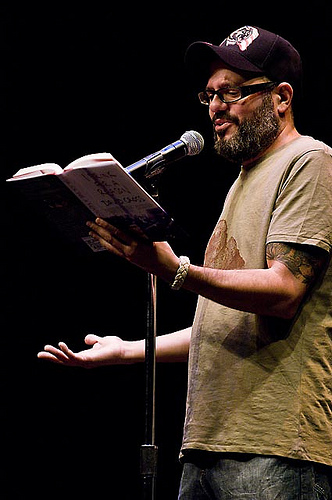 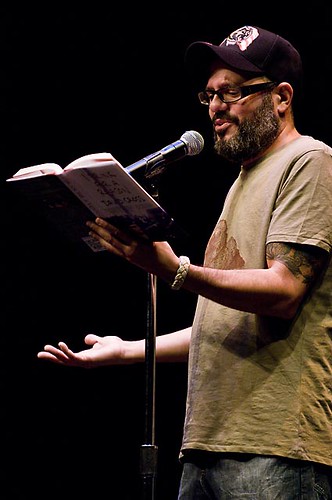 Sitting 2 rows away from David Cross was like waking up one Sunday morning to find out that the Easter Bunny, Santa Claus, and the Tooth Fairy were all real. There was a palpable, electric sensation of anticipation in the room as his fans peacocked their geekery to one another in the form of obscure Mr. Show and Arrested Development quotes. They giggled as they mouthed the words “Shut up you fucking baby,” to each other. In the final moments before his show started, staff members announced 300 people were still waiting outside to be seated. The warmth of the several hundred people already inside filled the space quickly and was a much needed respite for many braving the elements of the second day of Bumbershoot. Cross took the stage bearded and ever so slightly beer gutted, and immediately opened by hotly expressing his disgust of the merch table, saying that some of the books for sale weren’t even written, but merely had a written foreword by him. From there, he launched into a litany of jokes about S&M, yogurt, smoking on the airplane (He said, “I’m not above an airplane joke. It kinda counterbalances the 20 minutes about politics.”), and healthcare. The rest of his performance was one of many surprises, many guests, and went a half hour over the time allotted, much to the delight of everyone in the room. Cross himself appeared excited to be performing standup again and amused by the large number of people that had come to see him. There was more than one utterance of “Ok, I have one more thing for you then I HAVE to go…,” and when he finally left the stage, the crowd exploded with enthusiastic applause.

Cross, though on the literary stage, did not appear to be enthusiastic about reading from his book. He said he would limit the amount of reading he would be doing that night because he found reading from his own book “odd.” Commenting on how boring he thought listening to authors read their work, he said “Listening to authors read their writing on NPR while driving should be illegal.” He then read a brief passage from his new book, I Drink for a Reason, about reading his work at book signing events, and announced that he had brought several friends with him to share the stage with him. There was some noise of dissent from the crowd, but Cross mildly admonished it and said that there would continue to be plenty of his material to be enjoyed.

Cross’ first guest was “Daily Show” correspondent Wyatt Cenak. With a flat affect and sleepy eyes, Cenak launched into a hilarious series of mostly race-centric jokes. One of the funniest bits he shared was the concept of “snaps” from elementary school, and how he wasn’t very good at making them. “Yo mama like Darfur,” he said, “Everyone feels bad for her, but no one wants to help her.” As he left the stage, he made a parting shot about Bumbershoot headliner Sheryl Crow, wondering, “If Lance Armstrong had cancer, and blew a load on her [email protected], did he give her breast cancer,” sauntering off as sleepily as he had sauntered on. It was apparent that a few audience members weren’t sure whether or not it was okay to laugh, but most found it at least “Oooooh”-worthy. 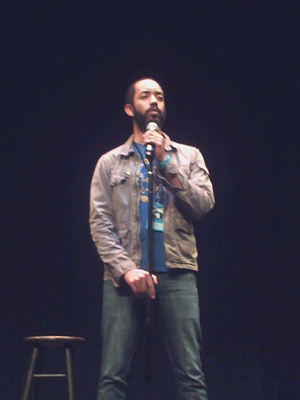 At this point, Cross returned to the stage to applaud Cenak, saying, “Some people are black, others are just luckier.” He then introduced his next guest performers, accompanied by more grumbling from the crowd. They were introduced as a group from New Zealand called “Bumberclap.” The stage went quiet, and three sets of hands emerged from the curtains to clap in a pseudo-synchronized fashion. Cross, Cenak, and a third performer leaped from the curtains, clapping, stomping and cheering for several minutes in a Stomp-style fashion, and the crowd roared approvingly. As Cross returned to the stage after making a quick change, he emerged slightly breathless. “For the days I wouldn’t be winded from clapping,” he said with a giant smile. 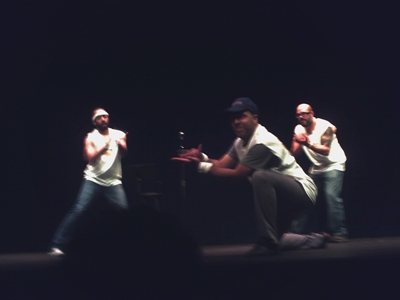 After a few reflections on his past drug use, including “If you’re gonna do heroin, have a seat; you’re dying. Enjoy the process,” he introduced his second guest, Doug Benson from the countless talking-head shows on VH1, including “Best Week Ever”. Benson shuffled onto the stage, and to the surprise of none, as he is a well-known ganja enthusiast, performed a large number of pot / stoner-themed jokes. He appeared to be in desperate need of a trip to 7-11 or Taco Bell (if you follow my wake), and found himself as amusing as the crowd did. Despite his demeanor, his wit was quick. On strip clubs he said, “It’s a good thing you can’t see emotional scars. If they were visible, strip clubs would be disgusting!” Perhaps his best joke, however, was his final one- “I think there should be a Bigfoot Channel- the tagline would be ‘Squatch what happens.’” 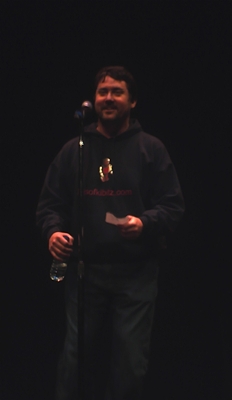 Cross returned to the stage and treaded into darker waters. Subjects included rape, depression, and the source of his life-long depression, which he had determined to be a rock in his shoe the entire time. It couldn’t have been a more perfect segue into the performance of his next guest, Maria Bamford. Bamford took the stage like a sprite or a fairy- slight, blonde, and helium voiced. What issued forth from her was one of the strangest, most uncomfortable, and funniest acts of the night. She discussed urinal licking, genocide, depression therapy, and her alter ego at length. Her best joke of the night was about starting a television channel for atheists, complete with the tagline “There is no God, welcome home!” Her apparent vulnerability and tiny demeanor serve as the one-two punch to her comedy because they are duplicitous. There is something far fiercer under her preschool teacher demeanor, and she knows it. Her parting shot as she skipped off the stage was, “I am a gypsy. I’m a sea cow. I know the boats are gonna hit me, but this is where I swim!” 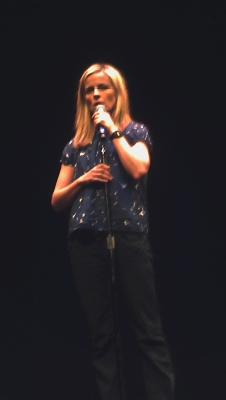 The final “guest” of the night was a group from New Zealand called “Bumberkeys,” comprised of again Cross, Cenak and a third, unintroduced member. The performance was nearly exactly the same as that of “Bumberclap,” with the addition of jingling keys. It was no less funny the second time than the first. Again, Cross returned to the stage winded and said “We need to create an atmosphere that allows me to breathe normally.”

Upon this final return to the stage, Cross appeared ready start what had the promise of being a brilliant bit about politics, something most in the audience had been expecting, but time drew short and the final part of his performance felt a bit rushed. Topics included his offense at the Whole Food Saran wrap product “If You Care,” the “primordial retardation of Coors Light drinkers,” because they needed innovations to make beer easier to drink, and healthcare. “That’s great if none of you have healthcare,” he said. “It means you die quicker and there’s more room for me.” He briefly wandered into talking about the hypocrisy of patriots before he was snapped out of it by the clock. It felt like he could have easily gone on for another half hour and looked quite settled in and up to the task. Unfortunately, that was not to be.

Say what you will about what Cross, who is considered by some to have a snarky, sneering demeanor, but he is a consummate showman, and made a point to say “Don’t believe everything you hear about me.” He is self-deprecating, clever, and does not suffer fools well from outward appearances, but underneath the caustic exterior lies much more than who people assume he is, and he shared the tiniest bit of this with the crowd. He shares the same vulnerabilities, neuroses, and triggers that many of his fans do, which make them strange and perfect bedfellows. As we all exited the auditorium, we fans felt a little superior, a little hipper, and a little less likely to go see Jason Mraz back outside in the cold evening air. There was no higher note to leave on, unless you were Doug Benson.

{Photo Credits: David Cross photo by Jason Tang, all others by Imaginary Mimi}