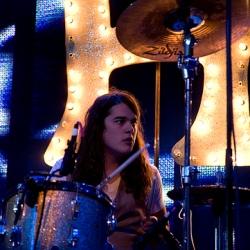 Sometimes a picture says a 1,000 words. If that’s the case, then we’ve got a whole lot to say about the rock and roll goodness that was Day 2 of Bumbershoot 2008, as captured by photographers Chona Kasinger, Andrew Waits, Nathan Feder, and Kyle Johnson.

The Shackletons. Photos by Andrew Waits.

These Arms Are Snakes, Exhibition Hall

Using the fact they haven’t shown their faces as a band for a few months as an excuse in case they forgot how to perform, These Arms Are Snakes took the stage. But soon, Steve Snere was commending the crowd for making the show funner than the band had expected, and he laid the asshole stage swagger on thick. He crawled under the stage for half a song, threw his belt into the crowd but then asked for it back minutes later, sat on guardrail huggers, flipped off the crowd, and nearly had the microphone cord wrap dangerously around him during one of many crowd surfing adventures. “Does the End even play your music?” someone cried out, referring to stage sponsor 107.7 FM. “Does the End ever play music you listen to?” Steve retorted. They pulled out several of their new songs from their impending release, of which confirmed the local boys are still going strong. Despite many real assholes in the audience, who were very obviously not real TAAS fans, and technical difficulties involving pedal cords, which provoked lame jokes to be told, and considering the general shittiness of the Exhibition Hall, the band brought out an entertaining set. (imaginary elle)

These Arms Are Snakes. Photos by Andrew Waits.

The Hands. Photos by Andrew Waits.