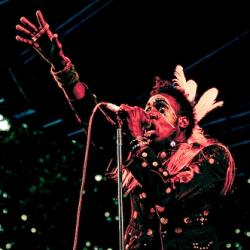 "This is the future," I thought to myself as a silver suited guitarist, part Vampire-part Blade keyboardist, and a yellow and red warrior whose weapons consisted of a beatbox, rewired toys, and various other electric contraband, took the stage. Fashion aside, the trio were bombarding us with deep rumbling bass and glitched out electronic noises.

Suddenly, waif-like and spry Saul Williams leapt from behind, like a futuristic Native American from a post-Apocalyptic time where he scavenged through torn down thrift stores for an ensemble. Ziggy Stardust advised him in the make-up department.

At first, Williams' message was lost in his rapid fire delivery and manic electronics. Yet when the song broke, he addressed the Bumbershoot attendees, reminding us of the history we hold in our hands.

Touching upon the fact we can make a difference in this city, using the WTO riots as a reference, he accusingly asked if we remember that this land was originally the Natives'. The show was furthermore dedicated to Chief Sealth (or as we know, Seattle), accented by Saul ripping the faux-headdress feathers from his hair and launching into another round of amped-up songs.

Even "Black Stacey" was transformed from a piano backed, mid-tempo vibe to a high impact flurry of Trent Reznor-esque industrial electronics. As the song addresses race and class issues, Williams' message throughout the set was about unity and breaking cultural boundaries. Declaring us all humans, rather than divided nations, he launched into a listing of nearly every deity, both mythical and metaphoric historical figures.

The repertoire consisted of covers from what one could consider the modern gods of music, from U2 to Rage Against the Machine to Nine Inch Nails (or at least most of the set had the same sound) to Bjork. Her already explosive "Declare Independence" was taken to a whole new level, Williams' voice breaking in a near plead at the line, "Declare Independence/Don't let them do that to you!" This song had a deep impact, as I overheard festival goers two days later discussing the performance.

What had the most impact, though, was when Saul brought back his slam poetry roots. He called for us to all take action at the brink of this monumental pinnacle we are standing upon in history, not directly informing us on who to vote for but alluding that we have the opportunity to make a significant change. Deeper than politics, the scribe called upon us to take action everyday. He creates lyrics and music to potentially instill thought and reflection; what are we doing to make our mark?

Saul Williams is the future; he was sent here from a time to which we can be headed, if we heed his message and step up to the challenge. 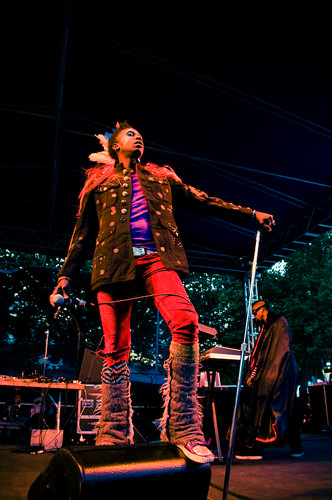 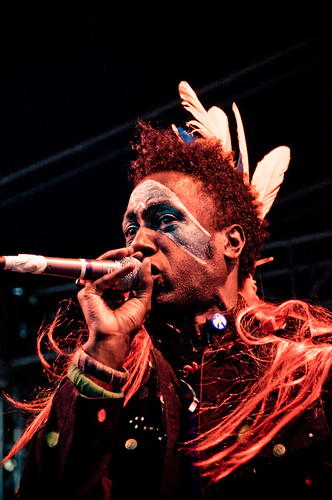 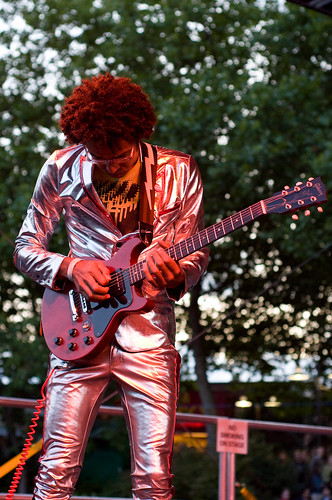