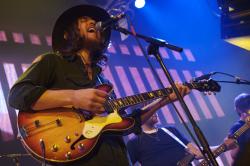 If they ever found the lost tapes of The Bands The Last Waltz and slipped in the Fleet Foxes, I don’t think anyone would blink an eye. The sweet harmonious lullaby poem-core would put any babe at ease. It seems like their music came from small hidden town deep with in the woods of Washington, but are yet another Seattle based band to be proud of.

If Jeff Buckley had done a country-influenced folk album, Fleet Foxes would be right on the mark.

They were definitely one of the highlights for me at this year's Bumbershoot.

More photos from the show...