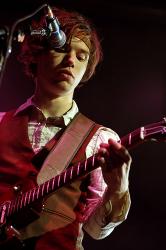 Bumbershoot 2007: Panic! at the Disco

I was anticipating Panic! At the Disco to be a favorite for Bumbershoot, and I'm not the only one. The turnout was overwhelming. The show sold out, as in… even if you got a Bumbershoot ticket, some people were denied entrance to the stadium. After having seen the band, I'd say they were the lucky ones.

I’m easily entertained and enjoy just around every type of music out there. My only live music pet peeve is having to count the number times the vocals get off key. Brendon Urie, the main singer for the band (who I may add looks much better without makeup… as you can see in the pictures) was ALL over the place in his vocals.

I’m listening to the CD as I write this review, and it hurts me to say that it’s quite impressive how recordings can be so manipulated to sound good. Aside from the lighting and special effects, the show (or at least the few songs I could force myself to watch before leaving) was lacking the sounds you hear on their albums.

But the show wasn’t a TOTAL bust. I enjoyed the hormonally challenged, black eye shadow, crowd surfing kiddos falling on me I took pictures. Did I show sympathy and traits of a gentleman…? HELL NO! “Get your ass out of my way, I’m trying to work” was my thinking, and shoving someone out of the way WITH an excuse was quite enjoyable. I owe that feeling to Panic! At the Disco. Thank you!

(This review really does hurt me. I can’t believe I’m putting down such a hot band… O well.)

{ed note: At least there are loads of nummy photos to enjoy, possibly more than you enjoyed the live set. Eduardo's right — they ARE easy on the eyeballs. Num! ~ igDana}