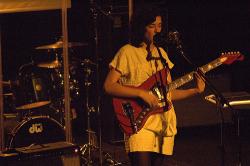 When the deejays on KEXP say they are broadcasting their live shows from the Music Lounge from a secret location they really aren't kidding. The map is quasi-helpful at best and there are no signs to tell you you're in the right place. The staff is helpful and when you arrive and they confirm you're where you should be it does feel like you're in on a special secret. The room is small and intimate with only a few rows of seats. The room is air-conditioned and it does not matter where you sit – you're pretty much closer to the stage being in the back row here than you would be being in the front row at some of the other stages on the Center campus.

The first show I saw there was for Annie Clark, a former member of the Polyphonic Spree and Sufjan Stevens' band, who just put out a glorious solo record earlier this year titled Marry Me under the moniker St. Vincent. When she took the stage promptly at noon she looked like the most unlikely of rock stars. She was quiet, unassuming, delicate, and cute in an awkward sort of sense. She waited patiently for KEXP deejays to finish up some loose ends before beginning. If anyone was unfamiliar with her record and expecting a sweet and generic singer-songwriter, they would have been taken out of the comfort zone from the moment she opened her mouth and sand her first note. 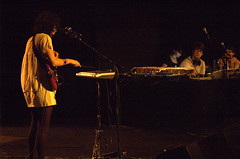 Like my rock and roll heroine Regina Spektor, who Clark bears more than a striking physical resemblance to, her fragile image quickly disappears when you notice just how jarring her songs are. She started out with "Now, Now," a bitter break-up number. It stands out because the lyrics are angrier than the music. As the song goes on, it gets even angrier and she starts using a sounding board to simulate a bass drum – only much louder. The first time she employed it had gotten everyone's attention – which she held throughout her thirty minute set. You could not hear any chit-chat between audience members while she was playing but the applause was thunderous.

As great as that was, though, the highlight of her set was "Your Lips Are Red." It's a jealousy tale ("your skin is fair, it's not fair," she sings in the chorus). On the version that appears on Marry Me the electric guitar is present and driving but it’s the vocals that are predominate. Live, she plays it like a loud rock song. Her guitar prowess sounds like she's channeling Jimmy Page. If you were listening to the performance on the radio the obvious assumption would be that she was being backed by a full band but that sound was only simulated. She used a lot of effects like a second microphone set up with distortion to mimic a call-and-response of a chorus of backup singers.

This was the first of two performances for Clark at Bumbershoot. Her second set is on an outdoor stage Saturday afternoon. I am very curious to hear how a larger audience responds to her unique voice and songwriting styling.