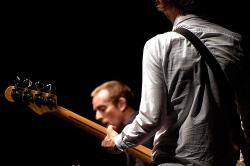 Bumbershoot 2007: Ted Leo & the Pharmacists save the whales

It was the last day of Bumbershoot and the end of the night. As my fellow PhotoG and I waited with anticipation for Ted Leo to start, I saw his new bassist drinking out of a bottle of wine. Of course I had to comment to him, "Wow… very classy." He replied, "I didn’t want to waste the plastic." This triggered a "save the environment" discussion, during which he revealed his wish to Save the Whales! It’s good to see such contribution to our eco system from rock stars. I told him he’d make a great spokesman for the environment.

Ted Leo & the Pharmacists were entertaining both backstage and onstage. So much energy surrounded this four-man band. Even though Wu Tang Clan was performing at the same time, Ted and co. were able to gather up quite a few followers with much needed enthusiasm after such a long day.

Before the show, I didn’t know much about Ted Leo except for his cover of “Since You’ve Been Gone," which Chona (the other PhotoG) and I requested… but apparently, the bassist hates it, as he turned around and said to take a picture of him saying "No0o0o0!" to our request. So it was a pretty safe assumption that he hated it.

The night ended with Ted Leo doing a one-man encore and a stage crew member going up with the guitar player to jump and… I guess you'd call it dance along. I’ll say it was movement with excitement. It was definitely an awesome show… and hey: maybe we saved some whales by watching them!