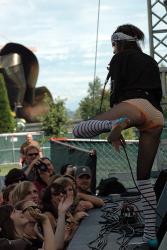 The Trucks truly are a sight to behold. If Peaches, Team Gina, and Princess Superstar combined forces and started a supergroup with Gravy Train!!!! you might come close to approaching the genius of these four ladies from Bellingham.

By employing simple beats with clever songwriting, the Trucks have some of the catchiest pop songs in the Northwest – even if they are just a tad risqué. Bumbershoot has always billed itself as a “family friendly” event, so I was initially curious as to why the Trucks, whose most well-known song is called “Titties,” would be playing early on a Sunday afternoon. What would the families think of hearing that song, and another rhyme by Truck-er Marissa Moore about “pervs in the bushes,” around lunch time? The realization came that most people who write letters about that sort of thing would probably be leaving church around that time and probably missed it.

There's an interesting juxtaposition with the Trucks starting off the same Bumbershoot day that Fergie, a star who seems to owe most of her success to being the subservient sex kitten of modern pop music, headlines. The Trucks, on the other hand, are in complete control of their pleasure and sexuality.

The Trucks got the crowd dancing early in the afternoon through their entire set and singing along to such crowd favorites as “3AM” and “Zombie.” A good time was had by all – except for maybe a few of the parents in the back who might be a little nervous that their kid may start singing along to the chorus for “Titties” and begin asking questions.

But pop is not always supposed to make sense – it's supposed to be fun, and even better if it makes you dance. That’s exactly what the Trucks do – and did.