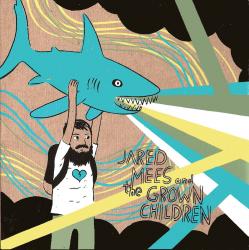 Jared Mees and the Grown Children

Do you know about Voodoo Donuts? It’s the best donut shop in Portland. Check that, it’s the best donut shop on the West Coast. You can get married there. You can also get a donut there that has a strip of bacon on top of it. It also has this donut you can (try to) eat that’s bigger than your head. It’s cool, Voodoo Donuts. It’s funky. It’s fun. It’s diabetes-inducing.

Why am I telling you all this? I can see Portlander Jared Mees and the Grown Children singing there. They’d fit in because they’re a lot like Voodoo Donuts, but without the whole diabetes thing. That’d be a downer, to go into diabetic shock at a rock show and Mees is certainly not a downer. No, he’s funky and fun and swell, like a Cocoa Puff-coated chocolate donut.

The new album, Caffeine, Alcohol, Sunshine, Money (their first was If You Wanna Swim with the Sharks) which was recorded in Portland and delivered to the music-loving masses by Tender Loving Empire (also of Portland), is kind of a silly fun little affair. You’re not going to find gut wrenching stuff here. You won’t find too much in the way of thoughtful insight, introspection, social themes discussed. No, you won’t find solid orchestration, clean voices, that sort of thing.

What you WILL find is a band ready to have fun (with an exclamation point!). Got a beer in your hand? Cool. Shaking the tush? Rock on. Sort of smile/laughing/flirting with a girl from work not really hearing her because the music is a little too loud? Sweet.

“In the fall we can go huntin’ down by the banks of Old Mill Creek,” Mees sings in the song “In the Fall.” And, indeed, the band tries huntin’ a jostle-y bustling boot-scoot-y tune on the banks of musical structure. Fire away, Mees and the gang. Oopsie daisies, shot a tree dead but who cares? It’s fun out here on the banks of Old Mill Creek. During the waltzy “Trampling Daisies,” Mees sings, “I’m taking photographs of loved ones because I can. I’m going to paste them over the doorways so God knows who to spare.”

There’s nothing but chipper tunes to spare on the album. That’s not to say this album doesn’t have a certain “Let’s untuck the shirt, swing around, get a little sweaty, laugh with friends, boozily kiss that coworker” kind of feel. But sometimes it’s a Tuesday morning, you have a report due at work, and you want a simple raised donut. Mees does not do raised donuts. Mees gives you frosting, lots of frosting and not a lot of filling. I wonder what his next album will be like? Simple maple bar, maybe, or perhaps a bear claw of sweet sweet goodness.