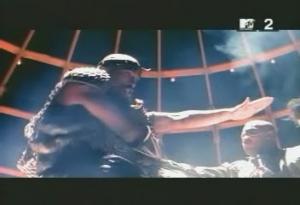 Now that the Holidays ™ have descended upon us like a pack of rabid wolves, I'm already feeling the exhaustion of the whole thing. It doesn't help that I greatly dislike flying. It used to be the actual "hurtling through the air in a aluminum tube" part that really got to me, but I have mostly gotten over that fear. Now, it is truly the "getting to the airport/ticketing/security" rigamarole that drives me nuts. It has almost become more effort to just get to the airport and deal with it than it is to actually get where you are going. I suppose this is the time tax we pay for living in the modern world, and considering that it would take me weeks to months to get from California to Boston one hundred years ago, I guess I am in no temporal place to complain.

Today's Roulette Spin brings us, well, "California Love" by Dr. Dre & Tupac. It was a bit of a stunner considering I forgot that I had the song on my iPod in the first place, but well, I have a lot of curveballs lurking in the dark corners of the device. The odd thing is that I really don't even like the song, it seems like one of the least interesting Dre songs, which is especially considering that Tupac is involved. I think Dre and Tupac just don't mesh as well as Dre and Snoop or Dre and Eninem. Not sure why to be exact, but the song just sounds horribly dated compared to songs from The Chronic. (By the way, is Tupac going to be releasing new material until the end of time? For a dead guy, boy is he productive. Makes you wonder if Axl Rose was really killed 10 years ago with the whole Chinese Democracy thing.)