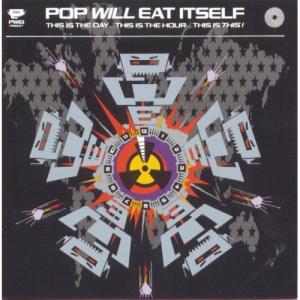 "Can U Dig It?" by Pop Will Eat Itself

If you ever wanted to condense the entire "I Love the 80's" series from former-music-playing VH1 into a single, four-minute montage, you just need to dust off your copy of PWEI's This is the Day … This is the Hour … This is this!, find "Can U Dig It?" and start listening. It's a veritable who's who of the 80's, listing everything from Spinderella to the Transformers; think of it as a much better, modern rock version of "We Didn't Start the Fire," which I suppose it is a stretch on any morning to envision a world with a good version of that song, but "Can U Dig It?" is just that.

I went on a multi-year quest in the late 90's to find all the PWEI albums – and trust me, they were hard to find in the U.S. at that time. I think they were mostly out-of-press and really, beyond me, no one really cared about the Poppies. However, after tracking them down one magical day in a tiny, new record shop in Harvard Square, I was able to fully indulge my sweet-tooth for these proto-dance-rock geniuses. I don't really understand how they're been left behind and forgotten by the hands of time, but if you listen to any of the "new rave" bands of the UK like the Klaxons or Hadouken! or any of the like, you hear Pop Will Eat Itself, whether you know it or not.

This is not to say that these new generation bands are representing the sound in the most interesting fashion, but it's there, like a recycled cup is going to have pieces of its long-lost and destroyed cousins that went into mix to make the shiny, new vessel. Maybe PWEI just seems so pie-in-the-sky to me because they were one of the first bands I listened to when I became conscious of "modern rock" and they were a band I could call my own. No, I wasn't rocking out to Nelson or C&C Music Factory when I was in junior high, I was listening to Pop Will Eat Itself – proving that I was soooo cool that you could keep a side of beef on me for a month. Or, in particular, I was really so dorky that I convinced myself I came all the way around the cool spectrum to return to coolness with my extreme uncoolness (a game I continue to play and by this point am a master.) So, maybe to the impartial observer, the Poppies really aren't that good, but to me, they represent the apex of my early music childhood. And now I'm definitely sounding like an aged rocker. Sorry.