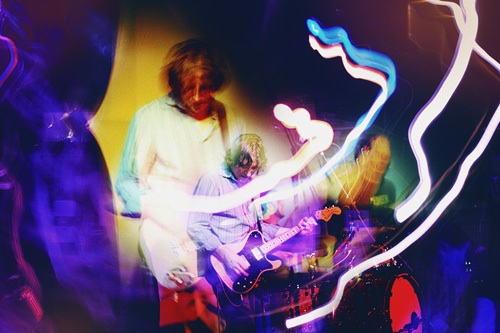 For a good many years, I’ve had a recurring dream that I’m visiting my native New Jersey but, due to myriad circumstances, am unable to leave. On one such, er, imaginary excursion, I wandered into a record store and, much to my surprise, heard the “new” Capillaries album playing overhead. When I sought to buy a copy, the clerk informed me that I could procure it either in CD format or, if I were so inclined, I could experience it by drinking a bubblegum-flavored soda. One needn’t be all that familiar with The Capillaries to understand why my subconscious might make that association.

The Caps hadn’t performed live for several years – the last time I saw them was in June 2008  when they graciously shared the stage for the farewell show of my comrades Edisyn. Suffice to say I was delighted when I learned they’d be playing this past Saturday at The Mix along with Can You Imagine? and Wormburner.

Though the lineup has changed over the years, The Capillaries are the brainchild of Matt Southworth. On this night, he was joined by Aaron Huffman of Harvey Danger fame on bass and one of my favorite drummers (and people) Mr. Aaron Brown.

The proceedings kicked off with “Moving to Waterloo”, perhaps the catchiest cut from their debut LP Overnight Lows & Daylight Savings. If I were ever to write a line as clever as “You gave me lemons and I know it disappoints you when I say ‘I don’t like lemonade”, I think I’d probably have it tattooed on my forehead. As is their custom, it’s three minutes of pure melodic bliss boasting more hooks than a pirate ship filled to capacity. Also deserving mention is “Don’t Make Me Hurt You.” It’s a jarring burst of Thirteen-era Teenage Fanclub featuring a (surprise!) catchy riff followed by a honey-sweet chorus that just works in spite of, or perhaps because of, it’s sheer simplicity.

Lest you surmise, however, that The Capillaries fail to depart the boundaries of the power-pop universe, “Atlanta” shows Southworth just as capable of penning a beautiful ballad, albeit a ballad with noisy guitars making their presence known. This tune succeeds so completely that it manages to break my heart and put it right back together again every time I hear it.

The performance grew stronger minute by minute throughout their ten song set. Here’s the scary part- they’re only gonna get better. The invite that Southworth sent out for the show made mention of the (hopefully) triumphant return of The Capillaries. And triumphant it was. Having my favorite local band back on stage was a most welcomed gift and that they sounded just as great as I remembered made it all the better.

Though there are no absolutely rock-solid plans for the immediate future, it seems The Capillaries are back!  Their long-awaited second record is complete, and there are more shows on the horizon, though it remains to be seen if they’ll perform under their traditional moniker or another. Doesn’t matter to me- they could call themselves Flat-Top Tony and the Purple Canoes and I’d be there. According to Mr. Southworth, future compositions could be a stylistic departure- maybe a little less bubblegum flavor. That’s just fine. I also like root beer.