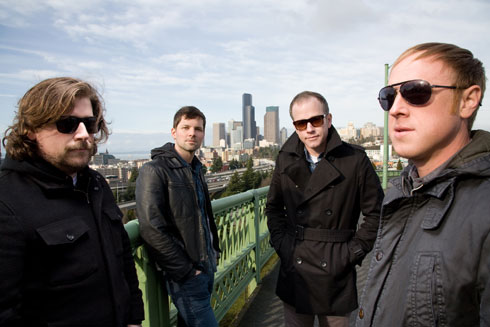 Virgin Islands is one of Seattle’s best live rawk and roil bands, souped up on speed-ball breakneck paces and reeling through the gears left behind from The Cops. Fronted by Michael Jaworski (vocals and guitars), and tuned in by two-lane blacktop hard by Aaron Ball (drums and percussion), Charles Keller (bass and vocals), and Christopher Meyer (guitars and vocals), they’re bringing dapper mayhem to the Vera Stage during the Capitol Hill Block Party (2011!) on Sunday, starting at 3 p.m. sharp.

I spoke with Mikey about the festival, the band’s recent full length debut, and love for Cap Hill!

TIG / Chris Estey: Is it a particular thrill to be playing the Block Party? What is it that’s more special about playing the CHBP than a usual show in the area?

MIKE: It is thrilling to play the Block Party! It really does feel more special than a regular show in the area. In my opinion, the Block Party is the coolest and most grass-roots festival in our area and it’s an honor to perform for it. It takes place in an extremely cool and vibrant neighborhood and it caters to such a great cross-section of humanity. It’s just a great street party with awesome bands and we’re honored to be a part of it!  Not to mention, Jason Lajunesse and crew book artists that truly represent the diverse music scene in Seattle and some of the best national touring acts around. I think you’d be hard pressed to find another music festival that does it so well, especially in a block party setting.

Are you OK with playing on a Sunday afternoon, from 3 to 3:30 p.m.? Would you kind of wanted another slot? (Which one? Which stage is your favorite?)

Oh yeah, we’re totally cool with the 3 to 3:30 slot on the Vera Project stage! Of course it would probably feel nice to be headlining the main stage of Friday night, and though we’re totally ready for it, I don’t think the world is ready for it yet. But next year! I do, in fact, love that we’re playing the Vera Project stage. It’s really amazing to play a stage where all-ages can come out. You know we do it for the kids!

You’re playing to promote your gut-kicking new album, Ernie Chambers V. God. What’s the story behind the record — its title, how and when it was recorded, and the snarling opening anthem (of the summer) “No Doctor”?

We released Ernie Chambers v. God this May and have been touring in support ever since it came out. All of which has been really great. We recorded the album last November in Seattle at Electrokitty Studios with local producer-whiz Johnny Sangster, all analog to 2″ tape. He’s a great dude and an incredible mind to work in the studio with. The title comes from an actual court case filed years ago in the Nebraska State Supreme Court by a progressive black politician named Ernie Chambers, who is from my home town of Omaha, NE. Ernie was one of the few non-white politicians (and maybe only black politician) who served in the Nebraska state senate for nearly 40 years. He fought hard to give poor people, minorities and anyone who needed it, a voice in the political process. To many people in the mostly conservative state, he came across as some kind of radical dude, and in some ways he probably was. Very importantly to me, he was a true role model of someone who wasn’t afraid to stand up and fight when other people were afraid too. He also wasn’t afraid to question the status quo and fight for positive change. He seems like an wonderful, intelligent and compassionate man who should serve as a great example to all of us. Not to mention, he just seems punk rock!

The song “No Doctor” was written as a commentary on the current state of affairs regarding the fractured health care system in our country. Basically, it’s just a really fun punk rock song with some strong lyrics calling out the current state of affairs. Drugs are over-prescribed, millions still lack health insurance and insurance companies, pharmaceutical companies, and large corporate hospitals stand in the way of any real change. Money is the motivation for these companies and people suffer in return. It is so fucking lame. Also, the lack of universal health care coverage in this country is morally reprehensible to me.

More about Johnny Sangster! He could make a Spectorian masterpiece out of a quiet wet … sneeze.

We love recording with Johnny. First and foremost, he’s a great engineer with really incredible ideas with everything from arrangements to mixes. Not to mention the dude just has golden ears and a truly musical mind. He’s a pleasure to work with and I feel like he has a very balanced approach in the studio. It’s a great combination of good times and seriousness. It’s very conducive to staying loose while working hard at the same time. He’s also true gentlemen and a pleasure to have a belt of whiskey with.

How would you describe the difference between Virgin Islands and your previous band, The Cops? Why the redux and why is it so different?

As a member and song-writer in both bands it’s hard to objectively describe the difference, although I feel like the difference is substantial. My wife once said that The Cops were more of a party band and Virgin Islands were more cerebral, and I guess there may be some truth to that statement. Ultimately, when The Cops went on hiatus I started looking for another punk rock band. Virgin Islands drummer, Aaron Ball is an old friend and was already playing with Chris Meyer (guitarist) and Chuck Keller (bass player). Aaron did a couple of tours drumming for The Cops and I really wanted to play with him. He’s really a motherfucker of a good drummer. Just loud, aggressive and pummeling. I wanted to continue playing loud, post-punk type music and the fit was great with the new line-up. Ultimately, there are many similarities since I sing, play guitar and write music and lyrics in both bands, but playing in the two bands feels worlds apart. Both bands are really great and have unique qualities that makes me love them both.

Will this be another thrilling set based on the debut that we’ve seen you play out in the past year, or are there some new songs or cover medleys (The Knack, Aerosmith, Bachman Turner Overdrive) that you’ll be springing on us?

We have a really strong thirty minute set of material from ECvG and our debut EP, The Age of Anxiety. We only get thirty minutes so were going to blaze and melt minds. I guarantee you that you will be entertained for every second of our set. We get pretty wild all up in that stage.

I’ll be blazing! Um, my mind. And dancing. Yes. What have been some highlights of Cap Hill Block Parties you’ve attended in the past?

I had a great Block Party experience performing with The Cops on the Vera stage a few years back. As a fan, I remember the very first block party, watching Love as Laughter play in the middle of Pike Street on some shitty, cold July day about thirteen years ago with another thirty people around me. That was pretty awesome. I also have fond memories of watching Sonic Youth and the Jesus Lizard from the roof of Neumos. The best Block Party performance was hands down Future of the Left inside Neumos a couple years ago. It was about three thousand degrees inside there and the band completely slayed. They have set the bar high for me and Virgin Islands will do our best to set it higher.

What else besides playing lovely and lively music in your own set will you be checking out? Anyone the band can all agree to see together?

We are all really stoked to see Federation X again. Everyone in Virgin Islands except me lived in Bellingham and knows those dudes. They are such an awesome band and I’m happy to see they’re making music again. We’re also big Les Savy Fav fans and they never disappoint. I’m also stoked to see Kurt Vile, Yuck, and Fucked Up. There are so many great bands this year and we have good options every minute we’re there!

Where do you recommend drinking or eating in the area during the fest? (In other words, where can I find you to slur some words at you when you’re not performing or seeing some other bands?)

My favorite Block Party hangs are Havana for drinks and a helluva great late night dance party. Quinn’s might have the best burger in Seattle. I really hope the Marination food truck is there again this year. Their food will fill you up and blow your mind. So many great spots on the Hill these days, it’s hard to go wrong.
Any tour plans before or after CHBP 2011?

We just got back from a 2 week tour and are starting to plan another one this fall. In the meantime, we’re working on new tunes for the next record and playing a fair amount in the NW over the summer months.

If you were telling a distant relative not in the music scene or business what you were happiest about playing in Virgin Islands, what would you say?

Virgin Islands is a great creative outlet for me and the other guys in the band are incredible musicians and great dudes to hang out with. We have a lot of fun together and really push each other musically and creatively. It’s truly a spiritual experience for me.

And how would you describe the Capitol Hill Block Party to them?

I would tell them that CHBP is an incredible music festival that champions one of the coolest and most diverse neighborhoods in Seattle. There will be great music, food, drinks and dancing. Also, some of the best people watching all summer. You might have the best time you’ve ever had!

If people were to throw things on stage to you at the CHBP 2011, what would you suggest they toss up on stage in appreciation?

I guess it depends on who you ask in the band, and there are any number of things that would make us happy. We certainly don’t want to encourage anyone to do anything illegal, but we trust that people will survey the situation and make their best personal decision before tossing up joints or articles of clothing. The only thing we really ask for is your undying appreciation and hopefully you’ll spread the word about Virgin Islands and buy a record at the merch table. WE ALSO LOVE HUGS!!!!