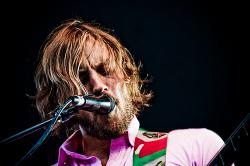 Menomena has always been a band worth noting, masterminding albums that age finer with every listen. Genius as they be, Menomena’s destiny isn’t in filling sports arenas.

After witnessing a choir-backed performance nearly a year earlier at Bumbershoot, it’s hard not to feel like the band’s live show has been watered down. Sure, a choir could have been more of an aesthetic choice than anything; it at least complimented Menomena’s over-the-top approach to making music.

Choirless, Menomena jumpstarted things with “The Pelican,” pounding away on electric piano, smashed cymbals, and blasted riffs. As they continued, thumping bass guitar lines and buzzing synth seemed to take a front seat on the soundboard as they muffled those charming vocals and sly, crisp drumbeats the band seems to structure itself around. Things seemed to work themselves out as songs like “Rotten Hell” slinked along clear as a bell.

Menomena is undeniably talented. It’s just a matter now of tightening up and fleshing out those talents to produce a live show. Though they do a great job at duplicating studio feats in live settings, after two shows, I’d still rather put on the old headphones and sit in the comforts of my living room.