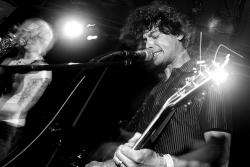 The body-crushing rock and roll slam of The Heavy Hearts ended the first night of the 2008 Capitol Hill Block Party for me, and completely blew away what I thought of the band from their record. On their last EP, post-punk and rock were created with incredible discipline and energy, but the sheer immensity of the two bass (Denise Maupin and Slice Kraft) juggernaut is a whole other animal on stage.

Maupin in particular is an awesome sight, her blonde hair being thrown by what seems like pummeling waves of rhythm from her own bass, Kraft's, and the expert explosions of drummer Lee Taylor. Coming right after the Pleasureboaters, it was an awesome juxtaposition of two powerful sounds and styles. I have to admit that I admire Pleasureboaters, but love The Heavy Hearts, who seem like veteran mercenaries of the punk rock wars, as if the singing of Brian Burnside and the playing of his crew are the final last blast of marginalist rock before the corporate boot stamps us all out. No, more than that, the band's name is right — the band seems to give enough of a shit about what they're saying and playing, against the alienation and anomie of mundane existence, that their emotions spill into a noise they can't help but make.

"On The Breaks" with its incredible percussion, the burning "Revolution," and the pissed-off-beyond-belief "TV" were all high points in what was basically an entire set of full on peaks. I know some Pleasureboaters fans left, and in their defense it was getting pretty late, but I couldn't help but wonder how anyone could have turned away from the Heavy Hearts mid-set. For me, it was like seeing the breath-sucking energy of the Ramones in Seattle in the early 80s — I was pulled deeper into the conversation than I had been with the less serious and more arty Pleasureboaters. Brilliant way to line up the bands, Block Party and King Cobra! I love ending the night on the very best show I'd seen that day.