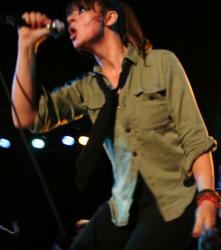 With her thick black eyeliner and her attacking stage presence, Cat Power was as gorgeous to watch as she was to listen to. This says a lot, as her voice is a rippling and hazy wonder.

The way Cat Power punched her arms out as she sang and stroked the air with her body movements was mesmerizing. Apparently this tour was one of the first times she’s not been behind the instruments. While I have never seen her before, it’s easy for me to say that she she was meant to be cut loose.

Live, Cat Power's songs were passionate and revealing. Her recordings are beautiful but live she’s even better. Where Is My Love?" set a mood entirely of its own. "Dark End of the Street" hit me in the gut. The swaggering "Naked, If I Want To" was a blues dream. Her show ended with her tossing tulips to the audience.

Also of note, opening duo Appaloosa was a surprise for me. I’d never heard of them before and it was a joy to hear their Nico-esque French synth pop.