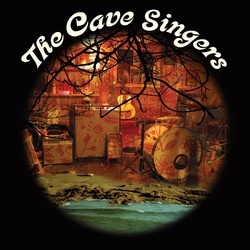 The Cave Singers at Neumos on Saturday

The majority of the discussion initially focused on how Derek Fudesco, Pete Quirk, and Marty Lund all played in loud rock bands prior to The Cave Singer’s formation, but the continual touring shows they consider this far more than a side project. Their debut in the fall of 2007, Invitation Songs, was notable for being completely stripped down to the basic elements – vocals, a strummed guitar, and quiet drums providing a beat in the background. Instant comparisons were to Woody Guthrie or early Bob Dylan, while some of the darker lyrical content was offset by the gentle melodies.

Two years later, the follow up Welcome Joy is exactly as titled. It’s a continued exploration of blissful americana (though the inclusion of electric guitar is notable), ethereal and upbeat, rarely pushing beyond mid-tempo. The live set remains mostly stripped down, minus the guest musicians who helped out in the studio, but still some harmonica and melodica interspersed throughout to mix things up.

Local indie rockers Feral Children are also on the bill, and in a vein more similar to The Cave Singers, the other opener is Shane Tutmarc.