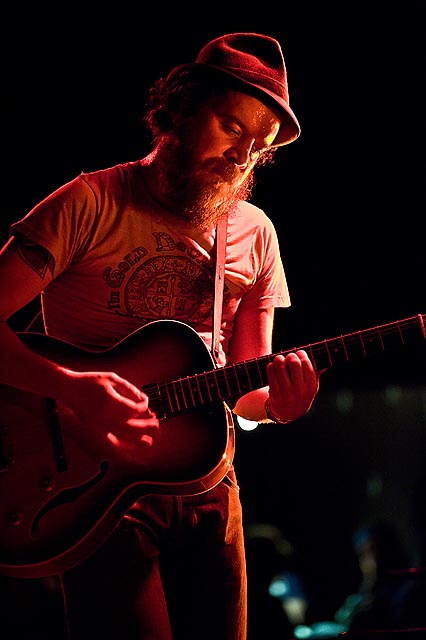 I was absolutely thrilled to get a last minute add to The Cave Singers CD release party for their new album, Welcome Joy, at Neumo’s on Saturday night. But wait, didn’t the record come out like in August? Actually I didn’t  give a damn, bring on my lumberjack swain. Incidentally, other very prominent local lumberjacks were in attendance. Free chewing tobacco if you can guess who!

After an initial warmup by Maple Valley locals, Feral Children (I love their album Second To The Last Frontier),  The Cave Singers took the stage with “Leap” from the new album. Quirk was in good form, his funny little dance  moves punctuating every nuance of his howly voice. “Leap” was a perfect song to begin with, it builds from simplicity to a very complex composition, encompassing all the things that make lumberjack rock great: shuffly,  train-tracky drum, simple blues guitar stylings and plenty of harmonica, hugely appreciated by the sold-out crowd.

This was surprisingly followed by that song from the Washington Lottery commercial (surprising only because they busted it out so early in the set). You know the one! Ha. My first reaction upon hearing “Seeds of Night” in a lottery commercial was dismay, but quickly melted into a “Whatever, I’m sure they made some money and at least it’s local” rationale. And yeah, I love that song. The crowd did freak out a little on hearing the first riffs, it’s pretty recognizable at this point.  It’s such a nice, simple song. They played it perfectly.

This was followed by the much heavier and more complex “At The Cut”. The audience went apeshit for this one. It  was fantastic to watch, even the bar staff and merch people were losing it. It was one of those moments where everyone was just completely “in it”. The song itself was fantastic, good deep drumming and some serious guitar jangle. Props to the guitarist and the drummer. However the most prominent member of the band is of course Pete Quirk, and I couldn’t help but mainly focus on him. He’s impossible not to watch onstage with his expressive body mechanics, he bends and contorts in such an involuntary way. “At The Cut” is gritty and dramatic; while performing it, Pete reminds me of some psychotic, prophetic hobo who’s seen too much and has all the secrets to the universe. But I think I’m projecting a little.

We got a little respite on the somewhat muted “Shrine” and then crowd really went nuts for “Summer Light”, dancing, clapping in time and jumping up and down all around me. It was fitting for the swingy little reel. It almost became impossible for me to get a good viewing position, I moved all over Neumos trying to find a good spot. People were dancing in every room. I didn’t mind. It was great to be in such an enthusiastic crowd. The Cave Singers certainly appreciated it as well, I heard Pete thanking the audience while I took advantage of an empty bar. 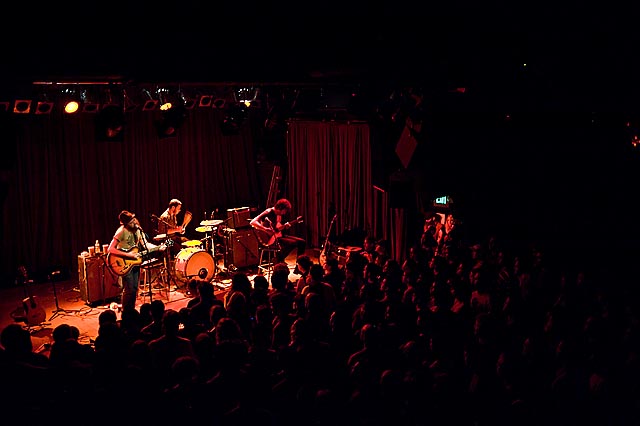 Aaaaaaaaaah, then I heard it: the creepy, backwoods serial killer-ness of one of my most favorite tracks from Invitation Songs, the dark and dirty “New Monuments.” Ooo, it was positively shivery. The bass was deep and rangy, coupled with shuffly drumming and Quirk’s a capella growling, filled with tambourine and haunting melodica. A melodica always lends a little crazy to a tune, don’t it? I couldn’t help but make up movie scenes in my mind for that one: Wet, dark woods. A tiny fire you know is a bad idea but you’re so cold and scared you couldn’t help yourself. A drooling, toothless maniac watches you from afar, waiting for you to fall asleep. Oh, and you’re on drugs. Yeah.

Still reeling, I got brought back down to earth by the tremulous tonic of “Helen,” Quirk punctuating certain lines with thumb to chest. The audience howled appreciatively at the close, as “Dancing On Our Graves” began, whipping the crowd into an uncontrollable frenzy. Quirk was all over the place, shuffling and stomping his feet in time to the steady plod of the drum and the perfect guitar picking. If ever a song deserved a washboard, it’s this one. What’s wonderful about the vocal style of The Cave Singers is that as the night wears on, Quirk’s voice only gets scratchier. And by “scratchier“, I mean “better.”

Encore songs were the sweet-as-pie “I Don’t Mind” followed by the contemplative “Cold Eye”. The rapt audience up front all sang along. Finally, B-side “After the First Baptism” closed the set. Pete looked like a naughty little kid with a secret, really feeling out the song as he swung his hips from side to side. Boy howdy, I love that man. Band! I mean I love that band! Seriously, Seattle is really lucky we can claim The Cave Singers. We’ve got a lot of very high profile local acts these days and The Cave Singers sophomore effort has proven that they can totally hold their own in that bunch.

All photos by Jason Tang. 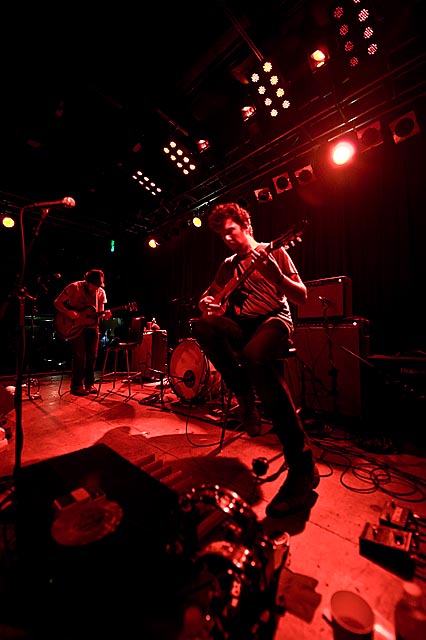 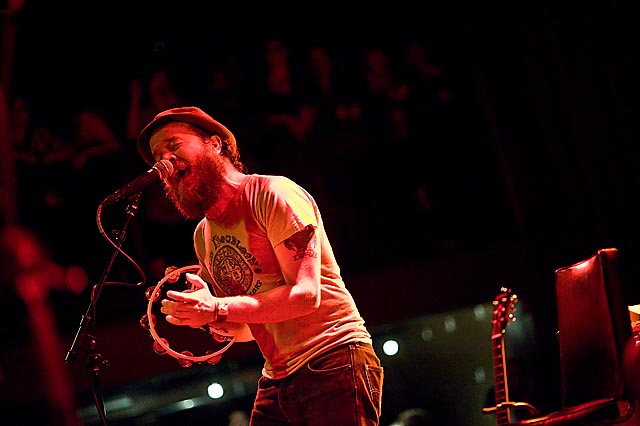 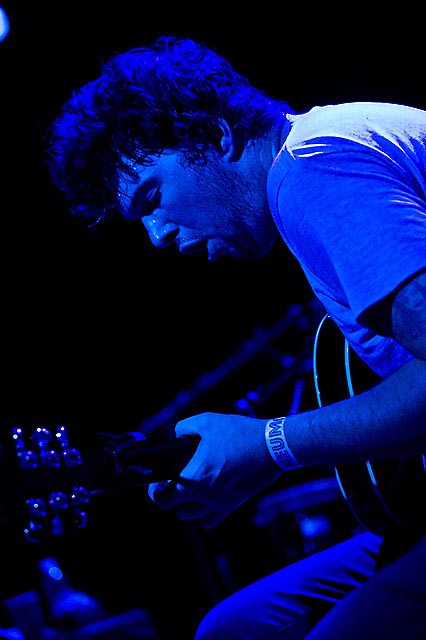 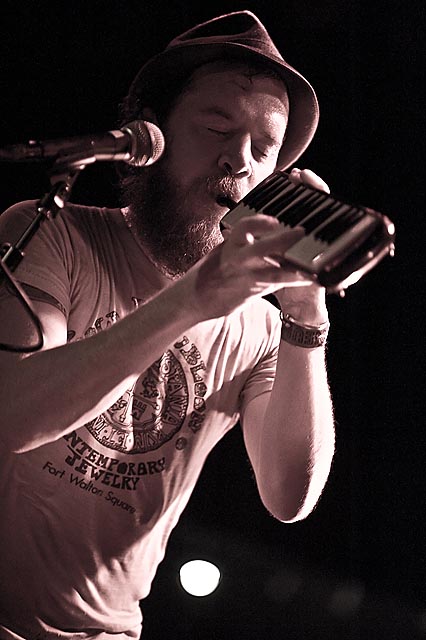 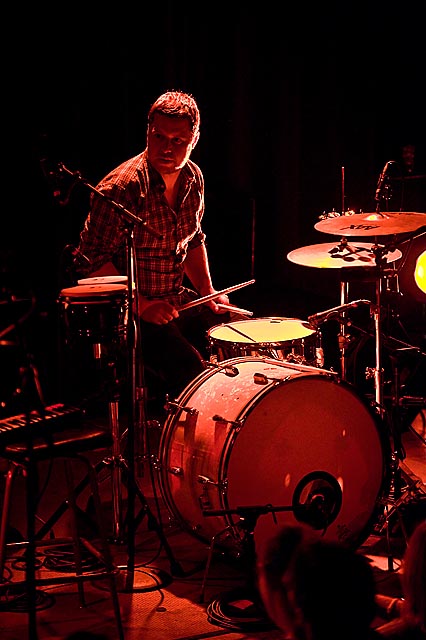