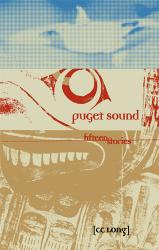 A couple of weeks ago I sat down at an Upper West Side restaurant for a wet lunch with an old friend of mine. Having just published "Puget Sound: 15 Stories", a book about the state we both grew up in, I asked if I might be able to ask him a few questions to write an article about the book for Three Imaginary Girls.

I wanted to write about the book because it is about the place I miss so very much. New York City is a far cry from Puyallup or Orcas Island, and the stories in the book paint well a picture of life in the Pacific Northwest. The setting is described in the second paragraph of the book as many native Northwesterners know it: "The day is varying degrees of gray, the only color there is in the universe on this foggy September morning."

But regardless of personal sutures to the stories and the place, "Puget Sound" is a remarkable collection of stories, portraying the natural environment of the Puget Sound region and the people who live there as tightly knotted together, a symbiotic duet of people and place.

C.C. Long grew up in Oak Harbor on Whidbey Island, an area where knowing the ebb and flow of the tide is as natural as hearing the planes leaving the naval base. Thus Long's stories tread the edge of a natural magic realism, where the magic of the natural world seems to enter the human ideology in an unnatural way. Killer whales wear the masks of ancestoral Native American tribes while others explode and cascade down like rain. Majestic owls break the windshields of cars with traps like iron maces. UFOs drop cows from the sky. The shotgun that killed Kurt Cobain is as valuable on the black market in one story as the stolen timber of a forest is in another.

The fifteen stories that make up the collection function not unlike the individual songs on a good record: Alone, each can be heard and enjoyed. But when they are all put together and experienced in one fell swoop, the effect is greater. Such it is with Long's book. From the title story which begins the collection, through stories like "Prayers, Cancer and Bombs," "Turkey Shoot," "A Story of Rape" and "Grunge Redux," Long paints a picture of the Puget Sound area as a region not defined simply by the throwing of fish or the wearing of flannel, not defined by the drinking of coffee or ownership of Microsoft shares, but as a place where struggle, beauty, hardship and dreams are all as real and mysterious as Puget Sound itself.

TIG: So can you tell me about "A Story of Rape" a little more?

CC Long: Well all the stories have a grain of truth in them somewhat, and that one came from an article I read about this taking of national forests just by, y'know, poachers. They go in, they take the wood, and make millions off it. It sort of was taken from that originally. It lead into the story. You know how a lot stories have a bit of Indian in them?

TIG: Yeah, sure. The first one…

LONG: Yeah, "How to Make a Totem Pole" too, and I sort of wanted to refer back to that because it's recognized in that whole region. They were there first, and they still have a powerful influence, especially with casinos that have started up in like every…Well, even though that's sort of bad influence in a sense, it's still valuable.

TIG: I recognized that in the book. I was telling someone about how if you've taken Washington State History, like in high school or something, then you start to recognize pieces or at least fragments of old Indian folktales in the stories. Especially in the first one, and like you mentioned "How to Build a Totem Pole." Did the idea for this book come from visiting home a while ago, or this something you've always wanted to do?

TIG: How much of "Grunge" comes from a real story?

LONG: Well the story about his gun, the gun he shot himself with, it was a big mystery, and in the files it says just that [Courtney] Love paid off the police just to get them to get rid of it. And yeah, it just came from that whole mystery and all the stuff that came from around it.

TIG: Courtney killed Kurt and all of that.

TIG: So you have said you have two other books coming out? One about London and one about New York?

LONG: Yeah, in the next year and a half. And they're just more short stories. I love short stories. As a form in think it's a lost art in a sense, and unless you're John Updike you aren't really writing short story collections. When you tell stories about places where people live, and they're short stories, I think it makes it easier for people to deal with them, or to umm…I don't know.

TIG: To identify with them?

LONG: Not only to identify with them, but also just to read them. The short attention span these days of when people aren't really reading long novels.

TIG: Well I know a Jhumpa Lahiri I think won the Pulitzer a couple years ago for a collection of stories, but it's not like it was with like, The Saturday Evening Post, when like, Vonnegut made a living off just writing for that. Nowadays, with like Lahiri's book, it's more like the collection of short stories is really just a commercial for the novel that's coming out. I mean, The New Yorker still does them, but even to do that you have to have written a novel, or, like you said, you're John Updike and you write once every four weeks.

LONG: Right, it's just the same people. I actually have sent my stuff to people at The New Yorker a lot, and have gotten good feedback but never been published. But I mean, just getting a response from The New Yorker has been hard enough, like, I've been sending stuff to them for fifteen years. I see, you know, the politic of it all, but of course you have to have a great story, which is hopefully the truth, but to get it published in something like that is tough.

TIG: Well and then there's John Updike who can just call up and be like, "Oh I've got a new story" and boom it's published.

TIG: Do you have a gre
ater attachment to any of the stories in Puget Sound, or is it pretty equal throughout?

LONG: It's pretty equal. Stories like, well, like "Jonny Baseball" is probably closer to my heart because of just growing up with baseball and all that, and like "Sacred Salmon," you know is definitely a father-son story. My father was a commercial fisherman and we went fishing a lot together, and that story wasn't something that happened, but it was truly a true father-son bond issue. And like "Deception Pass Bridge," that's sort of a true story about climbing underneath the bridge…

LONG: (laughs) Yeah, well those are sort of true to life living for me, but a lot of the other ones are just stories. Like "Space Needle" is about a guy being up there and there was that earthquake and everything…I read some stories about people who had been up in the Space Needle during that earthquake and seen the world sort of shake underneath you.

TIG: How hard was it for description? I mean, with something like "Deception Pass Bridge," you could write a whole book about what it looks like from underneath the bridge, but you just say they are under it. I mean this book was obviously written for the people of the area, like people who grew up on Whidbey and just know what it looks like there, but how hard was it to decide something like deciding whether to say "Eastern Washington University" or just, "he went to Eastern"? Was there any sort of push-pull?

LONG: That's interesting. I don't know…I think that was more of a just natural writing, "lay down the words" thing. Like people I knew who went east for college did seem like they were going so far away. It was like, "Jesus there's nothing but sun there" but then there was also the "You're going to get to see the sun!"

TIG: Yeah, I remember home. There was always the "Summer's coming, it's gonna be a Tuesday" type attitude.

LONG: Yeah, it's always raining, and if you think it isn't, then it's going to rain.

LONG: There was a story I actually was thinking about writing, because down there where you're from, like, Mt. Rainier could go at any minute.

The conversation went on for a while, and we sort of lost focus on things and started to reminisce about the Puget Sound area. Volcano warnings, fishing, crabbing, and I sure as hell wanted to know more about the time Long tried to climb underneath the Deception Pass Bridge — not the version in the book, but I wanted to know what was true.