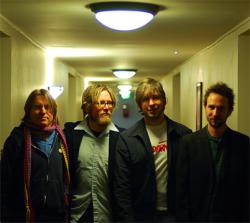 Centro-matic at the High Dive

For some people, a certain type of music just sounds like home to the ears. For me, it's rollicking alt-country with a garage rock twist. Texas roots music is prevalent in almost any Texas town you wander into. From small backwoods east Texas towns to the huge music city metropolis of Austin, you hear pedal steels and fiddles and the essence of hazy lo-fi permeates many bands' sound. Moving to Seattle has created a rock 'n roll hole that can only be filled by tried and true Texas bands like Centro-matic, who graced the Northwest this Friday at the High Dive.

There were four bands on the bill; South San Gabriel (melancholy and introspective Will Johnson side project featuring the members of Centro-matic), regionals Lossy Coils, Sleepercar (side project of Jim Ward of Sparta) and Dentonites Centro-matic. Unfortunately, for some odd reason, South San Gabriel took the stage immediately after doors opened and I missed their set. Lossy Coil followed up with a very Pernice Brothers-like pop folk approach. The highlight of their set was the melancholy ballad "Angeline," accented with well-placed blaring trumpetry. Sleepercar was cohesive and immediately enjoyable, with immaculate pedal steel work and keyboard bangin' country. The last song of their set was a crowd pleasing rendition of a Flying Burrito Brothers song. I had never heard Sleepercar before and the Sparta relation didn't excite me, but their rambunctious folk-Americana mishmash of sound was a fitting precursor to Centro-matics elegantly ragged sound.

I've probably seen Centro-matic thirty times and every single time they meet or exceed my expectations. I've never walked away from one of their shows disappointed, and despite my high expectations they weren't lackluster at the High Dive this time either. Will Johnson is a poet, gravelly-voiced and rusticly charming. His trademark half-kick/jump happens at every show, just at the optimal upswing moment of each song. During the slower tunes he looks almost cross-eyed, sincerely crooning into the mic, eyes squinted at the audience. There is an honest, down-to-earth essence to this band. You can see it in their eye contact, as Mark Hedman hits an especially prominent bass lick and nods at Matt Pence, kicking it up on the set. Scott Danbom's violin makes their lush arrangements even more so, deafening and absolutely full from the vocals on down to the auxiliary handclaps and tambourine. But one of my favorite aspects of Centro-matic's sound is their full frontal percussion approach. The masterfully disjointed loose snare pops and crashing ride cymbal do more than just keep the beat, they're the batter to Centro-matic's chocolate chips.

They closed their show with "Fidgeting Wildly" off of their debut, Redo the Stacks. Part of the way through the song, John Roderick of the Long Winters was invited onstage to shred. Head banging and hair flying, Roderick helped them finish off the set in style. As an encore of sorts, Will Johnson mounted the stage again and played a solo track to an absolutely captivated crowd, several of them calling out song titles as requests between songs. If you have the pleasure of standing right up front at one of their shows, as I did, the fuzzy guitar tangents and dense layers of sound provide a sonically encompassing feeling. It's just really damn loud, and absolutely perfect that way.