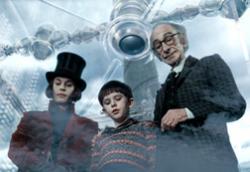 Charlie and the Chocolate Factory

It makes a lot of sense that Tim Burton would want to make a movie based on Roald Dahl's Charlie and the Chocolate Factory. In many ways, it's exactly Burton's sort of thing. It calls for massive visual inventiveness — what, oh what does the factory look like on the inside! Or even the outside! Burton has long trafficked in stories with oddball heroes in conformist lands — Pee Wee, Edward Scissorhands, Ed Wood, Jack Skellington, even Ichabod Crane are all childlike idealists doing their best to navigate a surprisingly hostile world. You could even make a case for Batman if you squint a little. Willy Wonka fits the bill perfectly: he's a wise innocent who's revised the world in his own image, and whose quirky individuality is an inspiration to the good-hearted. Plus, the story very much lends itself to Burton's skepticism for the acceptable; children in Dahl's stories are very much correct in mistrusting parental motives and the goodness of their peers.

The story goes like this: Willy Wonka (played here by Burton favorite Johnny Depp) is the greatest chocolatier that ever existed, whose candies surpass anything ever made and whose factory is the stuff of pure legend. Twenty years after he closes the factory doors, seemingly forever, a contest is announced: Willy Wonka has hidden a golden ticket within five Wonka bars, and whoever finds the golden tickets will win a day with Willy himself, inside the mysterious, magical factory. And possibly much much more.

Four of the five children who find the tickets embody exaggerated versions of common childhood Sins. Augustus Gloop (Philip Weigratz) is a fat, slow, eating machine; Veruca Salt (the deliciously bitchy Julia Winter) is shamelessly spoiled into unremitting greed by her extremely rich parents; Violet Beauregard (Annasophia Robb) is a champion gum chewer to whom life is one long contest she's destined to win; and Mike Teavee (Jordan Fry) spends all day watching TV and playing video games, and who has only contempt for the "real" world. And then there's the wonderfully big-hearted but very very poor youngster named Charlie Bucket (Freddie Highmore, from Finding Neverland) who lives in a sad little run-down house in London with his parents and four grandparents.

For the first quarter or so of the film, I was totally swept away. A few plot quibbles aside, I thought the characters were adorable without being obnoxious; the sets were grand and extraordinary; the music was transporting; and the actors snuggled themselves happily into the story and took us right in with them. Burton's sweeping visual ambition has plenty of room to stretch its legs without, for the most part, getting carried away and being expansive just because there was room for it. I especially liked the poor, twisted, slanted Bucket cottage, thiiiiiis close to tippling over but held up, one imagines, by the willful optimism and good-heartedness of its inhabitants.

But here's the thing: I didn't like Willy Wonka. Like in the book and first movie, he's still a quirky eccentric, a wide-eyed innocent who's wiser than he appears, whose cleverness and ingenuity are both wondrous and inspiring. But Burton and Depp made one crucial change to the character that spoiled him so much that I don't really see the point of making a movie about him: this Willy Wonka hates children. Hating parents, which he also does, might be forgivable in a story like this, but if Willy hates children, then what's the point? Why should we care if he devotes his life to an enterprise that makes children happy if their happiness is entirely incidental?

The twist, I imagine, is designed to give Willy Wonka room for redemption — somehow he's going to have to figure out how to like people, right? — but the story doesn't need that. The spoiled rotten children and their spoiled rotten parents are the ones begging, pleading to be taught a lesson, and I wasn't particularly interested in watching them receive that lesson from a slightly creepy misanthrope so totally out of touch with reality that he can only communicate by forcing himself to consult cue cards. Or with ungracious nonsequiturs. Depp has insisted the character wasn't based on Michael Jackson because Jackson at least likes children, but I can really see why people would level that charge, and that is not a good sign. Surely you don't want your hero reminding anyone even remotely of one of the creepiest living Americans.

Dahl's original story and the 1971 movie version both understand that the meat of the story is the immensely satisfying comeuppance that the spoiled children receive, and the fact that Willy Wonka is the benevolent, though not merciful, catalyst for that justice. (I'll only give away one of these lessons: the obsessive gum chewer ignores Willy's warnings and snaps up a new kind of gum that provides the sensation of a full three-course meal but has the unfortunate side-effect of turning her into a gargantuan blueberry.) The children may or may not learn from their experiences, but presumably their parents do, and we certainly do, or at the very least we get to feel comfortably smug that we didn't need to be taught such extreme lessons in the first place. We all know Charlie's the good one!

Now, by no means must a remake hold absolutely faithful to its source, especially if the source is a book and the remake is a film. They're entirely different beasts requiring different treatment, and most attempts to make a film obsessively faithful to the original book are at the very least misguided, if not disastrous (witness the first two Harry Potter adaptations for excellent examples of the former). But if you're going to tinker, you need to replace what you remove with something equally compelling. This twitchy, reclusive, unhappy Willy is, to me, no substitute for the original, and his presence drags down what should be a delightfully subversive story. Some of the most pleasant moments in the movie sneak up when Depp isn't speaking, when he's observing the scene with covert amusement, as if he couldn't help smuggling some heart into the role.

Fortunately for the film and for us, the other actors generally don't need to resort to subterfuge to shine. I don't think Burton could have cast the rest of the parts any better. The children and their parents are painfully and hilariously perfect embodiments of their flaws, and not once do any of them wink. I especially loved Violet's overachieving mom who walks just a little bit like a Barbie doll and whose smile looks borne of practice, resentment, and Vaseline. Burton also does something clever and subtle where he… sort of airbrushes the evil children a little bit so their eyes are juuuust a little large or their skin a tad unnaturally smooth. It gives them a fabulously eerie appearance without making them look inhuman. The Oompa Loompas are also a highlight. It must have been tricky to figure out how best to treat characters that skate uncomfortably close to indentured servants, but Deep Roy, a veteran of many small-people roles, who plays every single Oompa Loompa (including the women), perfectly nails a look that conveys complete awareness and bemused tolerance for the mayhem the Oompa Loompas inhabit and help create. There is no way to pity them.

In the end, though, we're left with a movie that's about a weird and not very likeable guy, and no amount of retro-futuristic whiz-bang coolness and excellent acting can quite make up for it. On balance I'm not sorry I saw it, and you probably wouldn't be either, especially if you're a devoted Tim Burton fan. But when I've got a wee one to entertain for a few hours, I'll be giving this one a miss and going back to the classic.