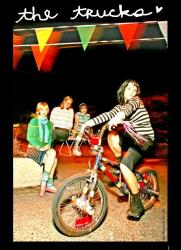 Cleisiophobia: The fear of being locked-in or trapped. It's claustrophobia's bratty stepsister, and unfortunately due to some childhood experiences, I have it.

The air inside of Neumo's was like a thick soup of sweat humidity. My mind was reeling as we're trapped amongst a sea of people in the narrow hall entry trying to squeeze into the Crystal Ball show room; what did that security guard at the North entrance say? The fire marshal was shutting down the admittance of more people into the 21+ show? Visions of me trapped within while a fire breaks out or something else ridiculous starts to put me in a panic. When the guard outside denied us in, we knew we had to be smarter. C'mon, I have a job to do, I'm supposed to be covering this show for TIG! Luckily the East entrance, through the beer garden, hadn't heard about the blockade and were freely letting people in.

But the guard wasn't kidding, they were far too over capacity for the mid-size venue. Facing another challenge, we made use the fact that Neumo's is like a labyrinth, breaking through the masses and finding room near the back wall. [And conveniently near the exits for me and my phobia.] I'm short though, so what to do about… a chair! I stood on my find by the KEXP booth just in time to see the Bellingham girls of the Trucks prepping their instruments-two keyboards, a drum kit, and a bass. Good thing I found elevation, otherwise I would have missed their signature wacky outfits. One was wearing a flashy sequined pink unitard with pink and black stockings, another was wearing a strappy teal cocktail dress. Later on, a third bandmate would exclaim how silly it was that she personally had a doily around her neck.

The sardine-esque crowd was trying their best to dance to the deep bass and catchy electro-synth the girls play. The musicians themselves busted out some aerobicize style moves. A few songs sounded as if Depeche Mode had been reincarnated as four teen girls. Besides the crazy get-ups, the Trucks have another schtick: they have actual songs about, well, trucks, including some pretty funny corresponding dance moves. They announced that the closer was about another local darling, Kimya Dawson. The crowd erupted, forgetting how smashed together they were, during the song "Shattered."

Local and worldwide listeners to KEXP's Nitelife with Michelle Myers were able to hear the show. Unfortunately for them, the hyper-energy couldn't be broadcast through microphones and speakers. If I thought A in H were going to tear the place down, the Trucks and their dancing mob of fans were seriously about to obliterate it. They by far exceeded my expectations [using MySpace for research can be quite deceiving], and they were perfect openers for Girltalk.