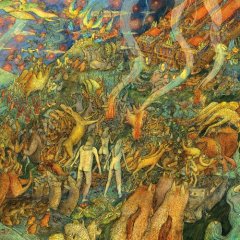 Sometimes it helps to gain perspective. For instance, !!! seems to have sat back and realized “Hey, why are all our songs so darn long?” Not to say that there is anything particularly wrong with long, rambling tunes that seem to go on forever. There's a time and a place for that, but when all your songs follow that pattern, well, then you begin to wonder if they need a merciless editor for a producer. Thankfully, !!! may have gained that perspective of their work and sure enough, Myth Takes, the first !!! album since 2003's Louden Up Now, is much more focused, concise, and above all, a real dance-pop gem that doesn't get lost in its own meanderings.

With an introduction like that, it would make it seem like I'm not a fan of most of !!!'s discography. Not so — in fact, songs like “Hello? Is This Thing On?” and “Me and Guliani Down By the Schoolyard” are just great. However, if Louden Up Now suffered from anything, it was a lack of restraint that made pretty much every song a mystical — and long — journey. Luckily, !!! seems to have learned from this and Myth Takes is a much more satisfying album for it. Right off the bat, the opening title track clocks in at a mere 2:24, but it has an infectious driving beat and bassline that almost sounds like a hybrid of dance-rock and sixties surf.

It's obvious early on that !!! took a much more rock-leaning attack to Myth Takes, like brethren the Rapture or El Guapo/Supersystem. Just listen to “All My Heroes Are Weirdos” and you get a succinct dance-rock triumph with scintillating keyboards and guitars mixing with thunderous percussion. It's really a high point for !!!, distilling their style and substance in under four minutes. If you're looking for more typical !!!, try “Heart of Hearts” which both satisfies the length and dance criteria. It has a driving beat and some sinister guitar propelling the song forward as the tempo builds, although the female backup singers give it an odd KMFDM-Lite feel. The same might be said of “Bend of Beethoven,” which has a much more classic !!! sound, with whispered vocals and dueling guitars as the dancing rhythm section. The song itself is broken into pieces that drive the tempo back and forth from a low boil to a full-on frenzy. “Yadnus” starts with a downright Gary Glitter intro with marching drums and slapped bass. It turns out to be one of the darkest and most interesting tracks on Myth Takes, a song that would be a perfect fit in a dark club late at night.

Some tracks are just plain dance, like “Must Be the Moon,” a song that oddly enough sounds like a lost Madonna track from Ray of Light bouncing back and forth with a Destiny's Child song. Not sure that's a good thing. !!! try almost straight-up indie-rock with “Sweet Life,” a song that almost entirely lacks the usual aspects you might expect from the band but it just never comes together, instead sounding like a band that wants to be !!!. “Break In Case of Anything” is more disco than what you might imagine from !!! and it ends up coming across as a bit of muzak, not really developing into anything. However, Myth Takes ends on a high note with “Infinifold,” a track that slows things down, focusing the band's energy into a tension that makes the song quite captivating.

Myth Takes is by no means flawless; it's obvious that !!! is experimenting with their sound as the band matures, as evidenced by the varying style and quality of the album. They clearly show that when they're focused, they can put together songs that make the dance-rock subgenre seem like more than just a passing fad. It might be best to see !!! has a band that has all the right tools at this moment, just needs a little more time to put it all together to really show us what they got.