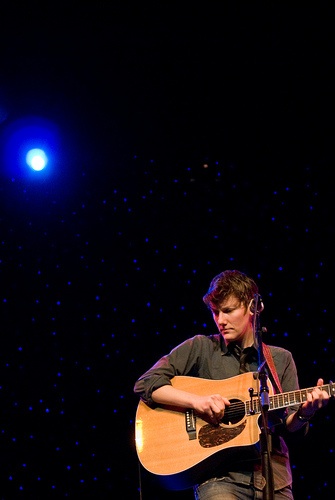 Chris Pureka, all heartbreak and a t-shirt.

Recounting the Chris Pureka show from thirty thousand feet, on my way back from a music festival, seems appropriate. I’m saturated with the sight and sound of the past few days, there’s a flawless other-world-ness about the topside of the clouds, and I couldn’t be more happy that I made the trip – all of which I felt to some degree both during and after Chris’ Wednesday night set. Having heard a few songs of hers here and there, and curious as to how it all translated live, I jumped at the chance to see her performance at one of my favorite venues in town – the Triple Door.

Touring through town as the opening act for a few dates with Dar Williams, Chris Pureka wove her set around forty minutes or so of material — including tracks from her much-anticipated third album, due out sometime in April. The glowy, glitter-y backdrop perfectly complimented her stellar stage presence, seemingly relaxed and at home in the “formal” vibe of the venue as she quipped during her warm banter between a few of the songs. The set itself really was fantastic — but above and beyond the major components, one thing stood out in contrast from recording to live performance: the absolute purity of her vocals. It’s not easy to get the combination that Chris Pureka puts forth — she’s confident without being cocky, lyrically defined but still tangible to a live audience, and equally adept at both technical instrument function and the actual crafting of her songs. But on top of checking all of that off the list, her literal voice was the resounding element that stole the show for me. Regardless of her subject matter, her voice was so crystal-clear and so bell-like in tone that I looked around a few times to make sure that she wasn’t lip-synching. Literally.

I wrote after seeing M. Ward live at the Showbox that his voice seemed like pure velvet pouring out of the speakers, that it was just a staggering thing to witness in real time — and a degree of that came to mind as I started writing in my head during Chris Pureka’s performance. I joked after the set with some friends that the whole thing was invoking visuals of one of those commercials for chocolate, where they’ve got ribbons of rippling silk flying by behind a truffle or a bonbon or whatever it is they’re selling, as the advertisers try to convey how smooth and flawless the taste of their product is — and as we laughed about it, I realized that the analogy wasn’t that far off from the truth. However in Chris’ case, the smooth and the flawless came from a natural state — no one was trying to sell anyone on anything from that stage, it was just a pouring out of one woman’s reality as best as she knew how to show what the world looked like from her side of the story. Both as a new fan and a member of Wednesday’s audience, I can emphatically say that she composed those snapshots for us perfectly.

{Pop on over to the imaginary flickr pool for a few more shots from the show!}