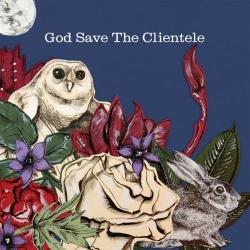 God Save the Clientele

At some point in the not-too-distant future, there will come a time when a new genre will need to be born, one that pleases the aging population of modern rockers who might be too old to really rock out yet still don’t want to be relegated to listening to Celine Dion or Michael Buble. Imagine it as a sort of Modern Rock Adult Contemporary and indeed, some of these types of radio stations already exist, heavy in the R.E.M.’s, the Wilco’s, and the Feist’s.

However, when the adult Modern Rock era really arrives, the Clientele will be seen as one of its pioneers – a band that create nice, pleasant music that was vaguely interesting and inoffensive to all, something the whole family could enjoy. God Save the Clientele is a perfect example of the sort of safe, harmless music that will be great to listen to at work or driving your Volvo back from dropping the kids off at soccer practice. There is nothing particularly wrong with God Save the Clientele; it's firmly rooted in the 1960’s pop traditions of the Beach Boys or the Beatles, with lovely arrangements and harmonies. You can tell from the first moments of “Here Comes the Phantom,” a pleasant little song that drifts by like a gaggle of brightly colored songbirds. You can pretty much describe any given song on God Save the Clientele the same way – a lot of the tracks are fully interchangeable; you can almost lose track of which track you’re listening. I can’t really decide if it is necessarily a bad thing.

The overall quality of the songs is good, but nothing really makes any one track stand out. A few are a little more memorable, like “Isn’t Life Strange” that has richly textured strings, or the oddly whispered “The Dance of the Hours,” a song that is pulled straight from the Belle & Sebastian vein. The similarly styled “Carnival on 7th Street” is a little livelier than most on the album, with strangely downbeat melody mixed in. Probably the most distinctive track on the disc is “Bookshop Cassanova,” a song with a real groove formed between the guitar and strings and Alasdair MacLean finally lets his vocals get less breathy and whispered. “The Garden at Night” is also a fun track, taking the Clientele’s sound much more towards the Kinks.

One thing that I was struck with on God Save the Clientele was the fact that some of the songs are really no different than what you might expect on a Chris Isaak album. For example, “The Queen of Seville” or “No Dreams Last Night,” with their quietly brushed drums and slide guitar, are more or less what you might have heard on Heart-Shaped World or “Somebody Changed,” which could be lifted directly from Forever Blue, but with the breathy vocals of MacLean instead of the Orbison-like croon of Isaak. Maybe this is the root of my association of the Clientele with the modern rock adult contemporary genre.

God Save the Clientele is a good album – let’s not be mistaken on that front. I can see myself listening to it again in the future whenever I need something calm and relaxing. However, there's really just nothing that captures my imagination on the album – it is almost too safe for its own good. Maybe at this point, that might be a detriment to the album in my mind, down the road it will be that consistency and safety that could draw me too the Clientele, but for now, I might need a little more kick in music that I listen to day in, day out.