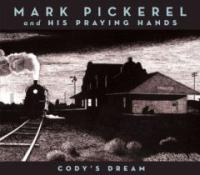 Seen busking on the streets of Seattle for money and sporting a 'do that could make even the hardest rockabilly dame go weak in the knees, Mark Pickerel is a man of many talents. A drummer, songwriter, guitar player and record store owner, Pickerel has moved from behind the set to center stage with his second solo album, Cody's Dream.

Mark sings his songs of heartache and regret with a delectably deep baritone and still hits the high notes like a hot knife through butter. The title track inaugurates the album with a foot-tapping rollicker. Breezy and energetic, "Cody's Dream" is an indie rock version of cowpoke country. It evokes the old-timers, and reigning greats, of country music like early Elvis, Bob Wills and Hank Williams with a splash of contemporary indie Americana. "Last Leaves" is a sultry rockabilly warble, pleading "Leave, just leave, do it for me…"

"She Calls" steps up the tempo, dotted with easy backing guitar quips, breathy backing vocals and a steely guitar solo. Brooding and somber, "One More Cup of Coffee" really showcases Mark's less than shabby songwriting and his whiskey-ed voice. The eerie, bittersweet vibe and somber lyrics give this an old Country & Western feel. The use of the mysteriously beautiful pedal steel, mellotron and bluesy guitars create a record that is more about the atmosphere of sound rather than useful as a track by track breakdown.

This album feels old, warm and haunting — an album for the lonesome on a heartbreakingly late night. Cody's Dream is engaging, intimate and yearning. Pickerel's songwriting spins tales of all the things that make life hard, and as a result, more liveable. It's a trip through dusty America, where tumbleweeds meet ghost towns and everything in between. As a set of songs, they are a testament to all the roads that are traveled, the loves that are lost and the hope that can barely be made out in the heat-waved horizon.