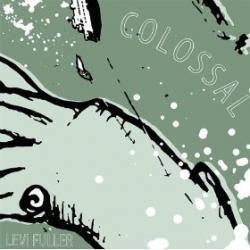 I keep playing Levi Fuller’s tumescent third and new album Colossal over and over again. Unlike many that I either/or enjoy and review, I start right from the first song, the title track, in which a slow build up of quiet then louder backing vocals pushes the song from warmth into empowerment. But the lyrics remained so mysterious to me, I emailed the Fuller and asked what the song was about.

“It’s actually about colossal squid (Mesonychoteuthis hamiltoni).  I wrote it several years ago to play at a meeting of the Cephalopod Appreciation Society.  Then I put it on Ball of Wax Volume 1.  Then I kept playing it.”

Ball of Wax is Fuller’s excellent running music anthology, a selection of tunes from comrades who are currently working indie folk-rock musicians, but including more experimental and rock genres as well. When I first started listening to Colossal, I thought it was simply an exemplary release for someone affiliated with the compilation series, but over time the eloquent diarizing of “The Mall of America” (“about a dear aunt of mine who passed away last year,” he writes), and the hilariously threatening “Mouse on Fire” (who might be small but is determined to cause some big damage to someone who burned his heart) seems equal to anything you’d find on a (usually consistently brilliant) Believer Music Issue sampler CD.

Fuller’s been putting out records since 2003, and his previous album This Murder Was A Peaceful Gathering was recorded by Brian Deck, with keyboards from Gavin Gregory (Water Kill The Sun). Casey Alexander of Wesafari helmed Colossal, and between his work and the mastering of Kevin Bressler, it is one of the most elegant, quietly powerful albums you’ll hear this year. No flab, every note picked meaningful and emotional. Ki Johnson, who played in lots of bands here before she took off to Austin, adds cello, whilst Alexander and Lindsey Reeves from Poseur contributed low key but very effective drumming. The matchbook-like packaging for the CD is simple and perfect, as is the cover illustration from Scott Bilstad (Pufferfish). It’s proof that things can be and even seem homemade but also proudly worth owning, and I bet the vinyl release is even sportier.