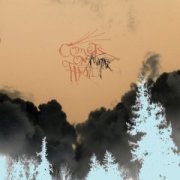 Maybe we’re approaching some sort of vast rock and roll event horizon. If we reach this theoretical moment, anyone who travels too far beyond the edge of the "nerd rock" event horizon will be forever sucked into the black hole with no hope of escape. I’m sure Stephen Hawking is working on this quantum quandary even as we speak … er … you read; however, I don’t need any high faluting physics equation to tell me what I already know. Comets on Fire are that event horizon, tumbling us toward an inescapable pit of nerd-dom. Avatar, although breathtaking at times with its scope and mastery, feels like a car careening out of control toward Meatloaftown.

Avatar plays big. It doesn’t have a low gear, it's just total rock and roll and isn’t ashamed to admit it. This isn't the ironic love of rock like the Darkness or the Datsuns. Instead, this captures more of the Queens of the Stone Age sincere love of the genre in its prog-rockiest form. You’d think from listening to Avatar that no music was made between the late 70’s and yesterday and we’re to believe that all modern music spawned directly from the dark hearts of Deep Purple, Rush, and Styx. The guitar flourishes and complex drum sections come at you from the first moments of "Dogwood Rust." There's no slow-slipping into it like a cold lake. Instead, we’re pushed headlong in. The keyboards swirl madly around us as the drums beat into a frenzy and the guitars clash frantically to compete with the layered vocals. It’s enough to make any music student drool with sheet music passion. The careful guitar picking on "Jaybird" betrays the academic feel to the song, almost as if it’s a project in recreating a 70’s rock anthem. At times, they almost sound like they enter Dios (Malos) territory and abandon their progressive mayhem on tracks like "Lucifer’s Memory," but unfortunately the relatively restrained opening is tempered by seven-plus minute runtime that allows for far too much random noise generation.

"The Swallow’s Eyes" and "Holy Teeth" approach E.L.O. ridiculousness, with strange beeps and whirls from a hidden synthesizer player that seems to be scratching to be released from his cage of crashing guitars and drums. However, one of the more attainable songs on Avatar, "Sour Teeth," seems to borrow more from the Doug Martsch school of jam rock and works to a surprisingly large degree even though the song runs to almost nine minutes. And as if they are trying to save the best for last, "Hatched Upon the Age" is fully realized without getting carried away into a wilderness of crazed rock noise. The piano line works with (rather than against) the towering guitars.

Maybe we’re just not ready for this sort of massive rock songsmithing, they seem to represent the ultimate realization of a high school rock band that yearns to have true musical legitimacy by flexing their musical muscle. But what ends up being created is inaccessible to the average listener — but is this a problem? Probably not to the band. We’re left to hope that we haven’t begun to reach the prog-rock tipping point yet again that might let loose a modern day Jethro Tull upon the world. Comets on Fire stoke that fire a little more, but still don’t push us past that point of no return.