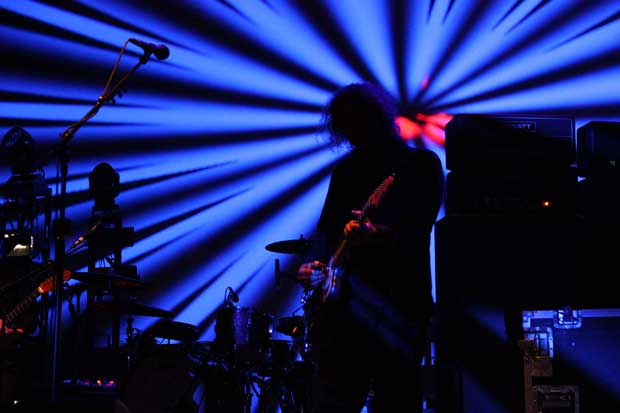 Concert Review: My Bloody Valentine at The Paramount Theatre

It’s hard to believe, but it’s been five years since My Bloody Valentine released their last album, MBV, and toured in support of the release. Last time around, they performed at the exceptionally horrible Showbox Sodo, where even non-electric music sounds awful due to its warehouse acoustics. Luckily, for Seattle last night, the venue was the majestic Paramount Theatre, a historic 1928 concert hall with warm acoustics for all manner of musical types.

My Bloody Valentine performances are known for their blisteringly loud volume. As the crowd was filing in last night, the Paramount staff were handing out earplugs. This obviously meant serious business and the suggestion should be followed in order to avoid tinnitus. I cannot recall another band that I have seen in the past twenty years who handed out earplugs before a show, but this is standard practice for the legendary Irish group.

Not surprisingly, their critically acclaimed 1991 opus, Loveless, was predominantly featured in the set as the band played seven tracks from that LP. What was perhaps slightly surprising was that they performed five songs from 2013’s underrated MBV. Rounding out the set was three songs from 1988’s stunning Isn’t Anything, along with three tracks from the You Made Me Realise EP and a new song that was debuted at the Meltdown Festival in London last month.

As anticipated, My Bloody Valentine opened with a rendition of “I Only Said” that shook the walls of the venue. The concert was consistently loud, which unfortunately did make the songs lose some definition. Both Kevin Shields and Bilinda Butcher’s vocals were virtually inaudible for the bulk of the tracks. I would personally prefer to hear a show of theirs at more of a Jesus and Mary Chain volume in order to hear the dynamics of the music better. In spite of this, the tracks blended together surprisingly well, despite the twenty-five years between Isn’t Anything and MBV. Highlights included songs from all three full-length records: “You Never Should,” “She Found Now,” and “To Here Knows When,” “Soon,” “Feed Me With Your Kiss” and the extended closer, “You Made Me Realise.”

The incendiary performance was augmented with fantastic psychedelic videos that were projected behind the band. These changed during each song that was performed and suited their woozy music perfectly. Kevin and Bilinda were austere on the far ends of the stage during the songs while bassist Deb Googe energetically delivered her bass lines near Colm O’Ciosoig’s drum kit at the rear center of the stage, creating an interesting dynamic between the guitarists and rhythm section.

The new song had a bit of a heavy, dirge feel to it. Supposedly, My Bloody Valentine is working on a new record that is due for release this year. If that track is an indication of the sound, we might receive a slower, heavier album when the next one comes out.

Nothing Much to Lose

To Here Knows When

Feed Me With Your Kiss

You Made Me Realise