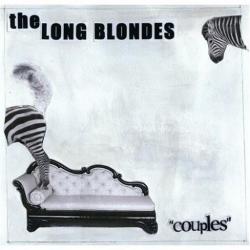 I don't often say this about a band but, what the hell happened?? I mean, honestly, did someone brainwash the band into thinking it is much more than it is? Did someone try to fuse the DNA of Long Blondes' scorching hot lead singer Kate Jackson and post-No Doubt Gwen Stefani to produce some sort of demonic chimera that will destroy mankind? Did somebody spend too much time with record of the Creatures and Debbie Harry and forget the reason we like the Long Blondes was because they wrote great pop songs? That is what ”Couples” feels like, a sojourn into what someone thought the Long Blondes should be rather than what they are.

Last year's Someone to Drive You Home was an unexpected surprise for me. It was one of those albums that came up randomly while I was driving somewhere in the Bay Area and I ended up repeating it over and over, mesmerized by the mix of post-punk rock, overt sexuality, and mostly Kate Jackson's ridiculous seductive voice. Much like another modern rock chanteuse, Karen O, Kate Jackson is a child of Siouxsie Sioux and although that will take you many places in music, it also can sometimes feel like a rut. Is this what happened with the Long Blondes? After racking up a lot of critical praise for the first album, they decided to work with Erol Alkan, a turkish DJ more known for remixes than producing, and the results speak volumes to that inexperience. Just wading into “Century” and you get the impression that the Long Blondes are mimicking some sort of hybrid of Lush and late model No Doubt (when Gwen decided she wanted to be a pop star, not a rock star) and the cultural exchange is one that neither side wins. Kate's voice is trying far too hard to be ethereal and breathy when she really needs to be more like Ann Wilson.

A few times they wander off the garden path to be like the Long Blondes we thought we knew. “The Couples” is a catchy pop song that speaks to Kate's obsession with sexual roles, right down to her plea ”you're not lonely, I am, baby." “Here Comes the Serious Bit,” “I'm Going to Hell,” and “Erin O'Connor” are aggressive, energetic, and exactly what the second album should have sounded like: a band that understand their strengths lie in fusing pop and punk in a feminist package. Instead, you get bogged down with songs like “Nostalgia,” a Banshees outtake for all intents and purposes or “Guilt,” a song that would have fit in great on Madonna's Music (no, not entirely a compliment.)

In a sense, the song “Too Clever by Half” is the perfect microcosm for ”Couples.” That is exactly what the album feels like it is trying to be: too clever for its own good. Instead, it feels forces, it feels like it lacks energy and spontaneity, it feels like too calculated a move for band like the Long Blondes. Maybe they felt like they needed more legitimacy as a musical force, and yes, even I admit that Kate Jackson does pull a lot of sway because when you got the voice and the looks, it is hard to not get attention. However, ”Couples” ends up being the sophomore slump we've all come to fear.