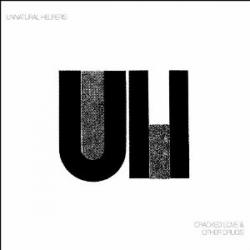 It’s kind of appropriate that last summer in Seattle hometown kerosine-crunch bashers Unnatural Helpers assisted Billy the Fridge and the other Top Pot celebrities fete the sugary fried breakfast-death eating frenzy of a Top Pot donut eating contest. Garage punk veterans Brian Standefort and Leo Gephardt (two Mr. Hydes from Idle Times and before that the Catheters and Tall Birds) combine the caterwauling and string crunching at the center of the Kurt Bloch-produced Cracked Love & Other Drugs, due out from Hardly Art on April 27. The Unnatural Helpers are the sound of diabetes-inducing bubblegum rock of a Buddha label band fermented into a sticky, vodka like liquor-treat as sticky and savage as a Stooges rant. (Hence, forced feeding donut comparison, and what must be the resulting OD sugar rush.)

Yes, this is on Hardly Art, but it sure doesn’t sound like your zine-knitting crafter cousin’s favorite chai tea soundtrack with a finger-painted front cover. Fifteen slivers of blue-grey bash in less than a half hour recorded in about a week by the sound jockey for the Fastbacks, with guitarist/keyboardist Chris Martin from Kinski along to help keep it textured, varying from perfect thug-pop “Sunshine/I Don’t Belong To You” to more meaty monsters like lucky thirteenth track “The Truth About You.”

But wait a second, that perineum-punching bass guitar is from Kimberly Morrison of Dutches & the Duke?! Yes, and she throws in some great backing vocals as well (as well as some more guitar and keys), all of this on top of Dean Whitmore’s drumming — The Unnatural Helpers’ drummer, center, long time man, and secret ingredient.

Whitmore is the Taco in the band’s Bell, the Deluxe in their Dick’s, the Mickey’s in their Big Mouth, melting the cheese on the songwriters’ beans and popping the hops for UH since it was sort of a Sub Pop (where he works) house band that also had Matt Olsen, Sean Kelly, and the charismatic, future mayor of Los Angeles Jed Maheu in the ranks. Thus you know this is a playful Ballard group house party platter, more stylistically coherent and melodically ambitious than you might think and it probably has to be, and in some very special shows coming up who knows who will be playing what on top of the sonic slaughter.

You don’t have to listen to it, but it’s an essential purchase to be left in the back window of whatever ride you own or happened to borrow, for everyone to see you’re keeping that Seattle goon squad rawk in rotation. Buy the long awaited UH full length Cracked Love & Other Drugs, and do just that.