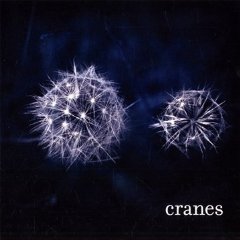 In the early 1990s, Cranes gained notoriety as a dark and noisy, but melodic outfit. Their first two records were and are astonishing, 1991’s Wings Of Joy and 1992’s Forever. These LPs showcased their songwriting talents and a sound that has the grime of Swans and the delicate beauty of the Cocteau Twins. This led to the band gaining the attention of Robert Smith and through him they were granted the prestigious opening slot on The Cure’s 1992 world tour. Since their heyday, Cranes has gone on to simplify and refine their sound, becoming more ambient with each passing album. Their new eponymous album furthers this evolution and is far and away the gentlest record of their career.

Where once there were overdriven guitars and pounding drums or melancholy acoustic guitars and fragile pianos, now there are sporadic electronics and clean electric guitars. Cranes’ last two studio albums (2001’s Future Songs and 2004’s Particles And Waves) signaled this musical shift and the new release is even more bare, being almost entirely free of bass guitar and several of the tracks lack drums as well. There is little variation in the song structures here as most of the tracks are built around repetitive keyboards and quiet musical accompaniment, thus providing a record to be listened to in its entirety.

This is not to say that Cranes is not good, it is just softer in style compared to previous releases. The record actually proves to be a rather effective trance inducing one that is best for late night listening. “Move Along” is a sleepy track that features some spacey analogue keyboards not dissimilar to something from Radiohead’s Kid A. Midway through the song, a rare occurrence of electric guitar and drums comes in, providing a robust, but ice thin backbone. “Worlds” is perhaps the album’s most memorable track and might be the only song that a DJ would consider airing on daytime radio. The combination of repetitive keyboards, acoustic guitars and the lovely voice of Allison Shaw recall the band circa 1994’s Loved.

All in all Cranes does not stand up that well compared to their earlier releases. If anything, it sounds like the group is either in a serene state or at worst, is simply playing it safe this time. Future Songs, for instance, was their first album to plunge towards the ambient, but its songs were better structured and more commanding at the same time. Despite this, Cranes is still a very good record that grows on you and is worthy of both fans and new listeners’ attention.