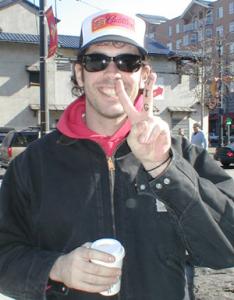 Joshua Gabriel of the Ruby Doe

Coffee Specs:
Beverage of choice:
Double Short Americano with Raw (slang for the sweet stuff in the brown packet).
Coffee Shop of choice:
Tully’s
Because…? “My Tully’s affinity was born from the dangerous procurement of a free “Latte-A-Day” card for a couple months from my parents,” Josh told us. Apparently, his folks won it at a charity auction along with some other Tully-crafted items. This lead to his daily drinker habit that has since reduced the brew as an occasional treat only (damn that “Latte-A-Day” card and its expiration date!).

What are you listening to now?:
Ikara Colt, the Music, the Hot Snakes, and ELO.

Random follow-up question: What is your wackiest tour story?
“We were touring the West Coast a while back and made a special sidetrack between San Francisco and San Jose to hit the Great America amusement park. We park in the fairly full parking lot and the guy at the ticket booth says that the park is closed for some Girl Scout Jamboree. Girl Scouts and their families only.

So, I sweet talked one of the Girl Scout Troop Leader Mom types and explained our situation — we were just three struggling musicians on tour and were looking forward to going to Great America.

She got us in and it was great! There we were in Great America, surrounded by thousands of Girl Scouts, and there were no lines on any of the roller coasters. Throughout the day we kept running into the Troop that got us in and at the end of the day they gave each of us a Girl Scout Girl-Power kind of patch. It is so cool.”

Interesting Stream of Consciousness Story: What did Josh wear for the first Ruby Doe show?
A black wool suit. At Central Washington University’s Hub back in 1993. He admitted, “It was a stupid move. I was a ball of sweat by the end… or actually, within a couple songs I was a ball of sweat. What was I thinking? Since then I understand the importance of proper show attire.”