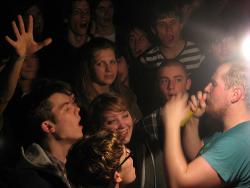 On Sunday night, Dan Deacon, a Baltimore electronic composer, found his way to Neumo’s for a set I enjoyed quite bit – probably even against my better judgment.

Deacon is an interesting artist. He makes electronic dance music and finds inspiration from sources like Tolkien novels and comic books (his latest LP is called Spiderman of the Rings). It’s like Kraftwerk for nerds instead of robots. He’s got a pretty diverse fan-base, which was out in full force to see him over the weekend. This included lots of nerds, geeks, electro-music aficionados and rock writers.

Deacon’s part of the show began with a screening of his new DVD Ultimate Reality, a collaboration with artist Jimmie Joe Roche. It was a trippy experience to say the least. Mixing loud, psychedelic colors with footage from Arnold Schwarzenegger movies and homage to Star Wars, all set to Deacon’s music, it suggested that we were in for a different experience. Or at least I, a Deacon virgin, was. Deacon enlisted two drummers to provide live percussion during the 35 minute screening. It was pretty intense and riveting.

After the screening, Deacon set up all of his gear on the main floor, not on the stage. The only equipment set up on stage were two large speakers and a light on a pole with a skull attached to the head. Neumo’s is not a small club and it was far from empty, so seeing what Deacon used to replicate his sound in a live setting was next to impossible from where I was standing (which was not all that far away). I think he helmed a table full of all kinds of gadgets that made sounds and noises. Had I known what his setup would be, I might have made a better effort to get close and see what was going on. With the crowd that was there, probably filling up 2/3 of Neumo’s, it would have been easier to see what was going on if the show was held at the somewhat smaller El Corazon. I’m not in the habit of saying El Corazon is preferable to Neumo’s but in this one case, I think it would be. Deacon probably would have sold out El Corazon, but I don’t think too many would have been turned away at the door.

The first thing Deacon did during his set was announce that he was upset with a review of Ultimate Reality that was in The Stranger this week. He called the writer, whose name he didn’t mention (it was Eric Grandy), an asshole and said he was pissed off to have someone accuse him of ripping off his older friends. I don’t know why I feel the need to defend Grandy (whom I've never met), but I found Deacon’s comments (at least twice during his set) lashing out at a fellow rock critic in poor taste. We reviewers are under absolutely no obligation to enjoy everything that shows up in the mail. The hero rock star playing to large crowds railing against the asshole critic who wasn’t feeling the same inspiration for their grand opus is the most tired cliché in rock and/or roll.

Yet, in the long run, none of that mattered — the stage setup, the rant against a critic, being close but too far away to see what was going on… What Deacon did was bring lots of people (many of whom were stepping inside of a rock club like Neumo’s for the first time) out of their homes on a Sunday night for a set that was always engaging and entertaining. I saw several Dungeons and Dragons nerds dancing on the stage. His fans sang along to every word when there were words and danced when there weren’t. He’s a populist who tries to get everyone involved in the show. Some of his songs I really enjoy, others I’m not feeling. His music is often disjointed and lacking a cohesive structure (but that’s my problem, not his), so of course it’s going to be hit or miss. I may not always like the destination, but that doesn’t mean I’m not happy to go along for the ride.