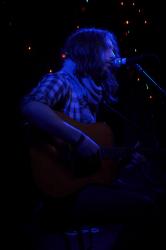 Bazan, Pecknold, and the last night ever at the Croc

if you weren't paying attention when Dave Bazan started, he wasn't waiting for you. Introduction-less, it felt you blinked and the stage went from empty to Bazan strumming his guitar. However, even those of us paying attention had no way of knowing that after tonight's show, the Crocodile would no longer be waiting for us; we were witnessing the final show of the Crocodile as we knew it, and it was a packed night that preceded the emptiness that followed the next day.

Robin Pecknold stepped out from the front duties of the band Fleet Foxes to open for this show Saturday night at the Crocodile, treating us to a solo set. His repertoire is very strong, even if assumingly brand new; one song he forgot the words to sing. Yet, he pulled it off well with a sly grin and a joke with a supportive crowd member. His voice is definitely one of the best out of Seattle recently, and the Christmas lights in the back seemed to twinkle at the same pace as his guitar pieces, a back porch and stories type of rhythm. He made me think of another certain soloist guitar man I saw recently, a Mr. Tom Brosseau. I could see a split disc or similar collaboration happen between the two.

I was standing right there, though, with the rest of the nearly sold-out show when Dave Bazan took the stage. Stronger live than recorded, his lyrics and voice are steeped in a raw earnestness that have very obviously established him as the college radio rock legend he is today. It was gripping enough to send me into a self reflective epiphany where I unlocked pieces of my memory long forgotten. Suddenly a few things clicked in my mind, and I realized David Bazan is an artist whose medium is emotion.

The honesty stretched beyond his music into his live set, where he took breaks to have brief Q&A sessions with the crowd.

Q: "Why did Pedro the Lion break up?"
Bazan: "My friend quit the band, and I didn't feel right continuing on without him."
Q: "Will you play with another band?"
Bazan: "Sometime during my life. I'm trying to figure out my problem still."
Q: "What is 'Some Girls' about?"
Bazan: "It is about becoming famous without really trying."
Q: "Where does Bazan come from?"
Bazan: "I believe it comes from Spain. You wouldn't know, but I'm really half Mexican. I'm your affirmative action performer for the night."

The choice of songs went beyond his latest solo work, with a few older Pedro songs slipped in. One Christmas song and a cover were worked in as well. "God Rest Ye Merry Gentleman" is actually my favorite holiday song, and Bazan put his own twist on it. The second and third verses changed from the story of Jesus to a modern day story of a man questioning his belief of the Christmas story while preparing the decorations for his young child, possibly autobiographical.

Bazan closed out his set with a cover of Jeff Buckley's "Hallelujah." This somber song was an eerie choice for the as yet unbeknownst demise of the Crocodile. "But you don't really care for music, do you… It's a cold and it's a broken hallelujah…. but all I've ever learned from love, was how to shoot somebody who outdrew you."

Suitably for the last night of a Seattle music landmark, it was a nearly sold out night full of friends and one of the musicians who had a big part in putting the scene on the map.