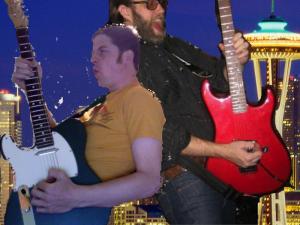 Two of the most talented and literate musician writers we imaginary girls know are John Roderick of the Long Winters and D. Crane of BOAT. Since the two bands will be playing together on July 5 at the Showbox at the Market, we asked Crane to interview Roderick, which he did. Much hilarity and wisdom ensued.

Have a read of the interview below, and make sure you don't miss the Long Winters at the Showbox in the Market this Saturday, July 5th, when they play with BOAT and the Cops.

DC: Why the resurgence of facial hair in indie music? Is it possible to be a good band without having at least half of the bandbearded? Follow up: can Sean Nelson grow a beard? Did this lead to his leaving the band? (sidenote: He is a personal hero….ever since he taught me to open a beer in a doorjamb and then referred to me and the rest of the BOAT as lovelies.)

JR: Beards are an elegant way for young men to indicate that they are serious persons, especially if paired with western shirts or corduroy. Without a beard, an indie rocker risks seeming frivolous, especially if he has a penchant for white-framed sunglasses. It IS possible for a band to be both good and go without beards — for instance, if they make sparkly indie-pop — but it's an unnecessary risk. A good way to start is for the largest bandmember to grow a beard first, which will cuddlefy him. This rule applies to all-girl bands as well.

Sean Nelson can indeed grow a rather splendid beard, which he sported during his "lost weekend" period, and which he now disavows. He quit the Long Winters in order to putter around his garden in a seersucker suit and talk to rabbits, moles, and chickadees as if they were understanding friends.

What is your favorite microwave recipe?

I am actually experimenting just this minute with my new crockpot, cooking a variety of mushrooms, peppers, onions, garlics, and other goodies into a delicious stew. Crockpots seem to have the advantage of hardly need any kind of recipe at all. You just throw ingredients in, and let it cook for ten hours. Bravo! I do use the microwave every day, and my latest policy is to not microwave anything in a plastic container. I've been microwaving things in plastic containers my entire life, but just recently decided that the plastic must be shucking off some terrible poisonous chemicals, so now I only use glass. Every once in awhile I decide on a whim that something is poisonous or dangerous and I avoid it ever after.

You are a shredder (reader see also: virtuoso solos in It's a Departure), and so is J. Mascis. J. Mascis has custom Nikes, and a custom Fender Jazzmaster guitar. If Chevrolet called and said they wanted you to design a "J-Rod," what would it look like?

Hmmm. A close inspection of my guitar playing will reveal that I am a faux-shredder who masks his poor dexterity and laziness behind a scrim of silly guitar bits, but for the sake of argument I'll say: Damn right! A Chevy J-Rod would be a Pontiac, and it would be an exact duplicate of a '66 GTO convertible with white leather interior, but with modern suspension. If I had custom Nikes they would look like brogans, but have the hidden high-jump technology of Air Jordans. If I had a custom Jazzmaster it would look like a Gibson Explorer.

I'm a devoted Ginger Ale drinker, glass with ice. I cannot stand Diet Coke and cannot believe that such a thing exists and is popular. My favorite beverage is a special mixture of fruit juice and pop, called the "Fruity Pleaser," which was invented for me by former Crocodile bartender Jeff Sparks, who now tends bar at the Dexter and Hayes Pub on Dexter Ave. The Fruity Pleaser was further developed by former Crocodile bar manager Val Kiossovski, who can now be found at the Solo Bar on Roy St. Darius Minwalla at the Moe Bar also makes a mean Fruity Pleaser. Any other Fruity Pleasers you might find are not officially endorsed Fruity Pleasers and may be in violation of copyright.

Do you guys have any special pre-show rituals? BOAT has a pregame ritual of eating at Piecora's (home of the absentee/you gotta beg for it refill).

The Long Winters are battle-hardened road warriors, so before a show we're generally sharpening our weapons, tearing hunks of meat from a fire-roasted beast, cavorting with wenches, and saying things like "Amuse me clown, or feel the wrath of my steel" and so forth. Immediately before we take the stage we summon a demon from the eighth circle of hell and strangle him with a bass string in order to sate the hunger of our lords and abate the howling of the evil wolves of Odin. But it's super-cute that BOAT go to a pizza parlor together, and I wouldn't for a minute want to diminish that experience for you guys.